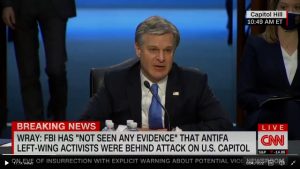 FBI Director Christopher Wray has stated that there is no evidence to support the theory that Antifa and fake Trump supporters were present during the Capitol riot that took place on Jan.6.

Wray gave testimony in a Senate Judiciary Committee hearing and fielded questions from Democrats who are desperate to disprove any theory that might tie back responsibility for the violence that occurred to their own party.

“Do you have any evidence that the capital attack was organized by, quote, ‘fake Trump protesters?'” Senate Judiciary Committee Chairman Dick Durbin asked Wray during the hearing.

“We have not seen evidence of that,” Wray said in reply.

Republican Reps. Matt Gaetz of Florida, Mo Brooks of Alabama, and Paul Gosar of Arizona were among those who alleged soon after the mob attack that antifa may have played a role in the event.

Democratic Sen. Patrick Leahy of Vermont asked whether Wray had seen any evidence of antifa or left-wing groups playing a “significant role” in the attack.

“We’re equal opportunity and looking for a violent extremism of any — of any ideology. We have not, to date, seen any evidence of anarchist, violent extremists or people subscribing to antifa in connection with [Jan. 6],” Wray said. “That doesn’t mean we’re not looking, and we’ll continue to look. But at the moment, we have not seen that.”

Wray did go on to note that the FBI saw more arrests this past year from violent anarchist extremists than in the previous three years altogether.

FBI Director Christopher Wray: No evidence of anarchist violent extremists, no evidence of Antifa, in connection with the January 6th insurrection. pic.twitter.com/YrgTLEVaRF

Gee, I guess since Wray says there’s no evidence we should just all believe him, right? I mean, it’s not like the FBI would purposefully lie about something to attack former President Donald Trump and make his supporters look like terrorists or anything nutty like that…