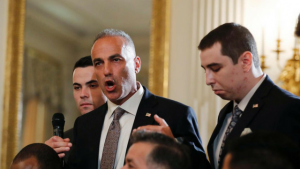 Over the last century, our country has seen a dramatic shift in the way we view men. Men have been bashed and dismissed as useless, as radical feminists attempt to pave the way for a woman-dominated world. And in many ways, they’ve succeeded.

Feminism is easy to blame, but there are also millions of weak-spined men who have rolled over and let the change happen. As a result, we are seeing a disgusting trend of cowardice among men who are unwilling to stand up and defend the chivalry and dignified manhood that once made Western Civilization great.

Now, the father of one of the Parkland victims is suing the Broward County Resource Officer who remained outside the building as teachers and students were slaughtered by a young man who had some manhood issues of his own.

The resource officer and all the Sheriff’s deputies who failed to enter the building on that awful day are incredible cowards, while the shooter, Nikolas Cruz, was failed by a society that should never allow a single young man to act out in the way Cruz had been prior to the shooting.

Cruz is now sitting in jail, Broward County Sheriff Deputy Scot Peterson, the man who waited outside Marjory Stoneman Douglas High school while children die, is a free man who has yet to face criminal charges for his gross negligence.

And victim Meadow Pollack’s father, Andrew Pollack, is not having it.

“I filed a wrongful death suit against Deputy Peterson today. I want to expose that coward so bad. Where ever (sic) he goes I want people to recognize him and say that’s one of the cowards of Broward. The SRO that let those children and teachers die on the 3rd floor!” he announced on Twitter, following his filing of a wrongful death suit against Peterson, along with the estate of Lynda Cruz, James Snead, Kimberly Snead, Henderson Behavioral Health, Jerome Golden Center for Behavioral Health, Inc., and South County Mental Health Center, Inc., according to The Blaze.

“This suit has nothing to do with money. I want to be sure anywhere he goes in this country he will be recognized as the coward that could have gone in and saved the students and teachers on the third floor,” Pollack continued.

Pollack’s son, Hunter, shares his father’s sentiment: “He’s a WEASAL (sic)COWARD, and no matter where he goes should be recognized as a failure. He failed to act, and than (sic) lied about it after. We will not forget!”

You may remember Pollack as the man who was attacked on social media for wearing a Trump shirt while searching for his daughter before learning she was among the deceased.

This is what our country is in dire need of–more men who are willing to stand up and expose the cowardice of men who fail to fulfill their duty as protectors and defenders of women and children.

Political correctness be damned–in a civil society, men understand this duty and strive to fulfill it. Decent men everywhere stand behind Pollack as he exposes a coward.