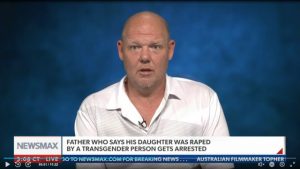 Scott Smith, the father of a Virginia high school student who was allegedly raped by a boy wearing a skirt who claimed to be “gender-fluid” in a girl’s restroom located in Stone Bridge High School, spoke with Newsmax on Wednesday and stated that both the school and local law enforcement officials asked him to stay quiet in order to get justice for his daughter.

He then went on to say that the boy involved in the situation was then quietly transferred to a new school where just two weeks later he was arrested in connection with another sexual assault in a classroom there.

”I was told I needed to stay silent and not speak out about this if I wanted to see justice for my daughter,” Smith went on to say during his interview on ”Eric Bolling: The Balance.”

Smith was arrested in June at a school board meeting in Loudoun County after he flew into a rage following comments by Superintendent Scott Ziegler that ”the predator transgender student or person simply does not exist,” and that to his knowledge, “we don’t have any record of assaults occurring in our restrooms.”

As for the initial response from the school, ”I had to raise so much chaos at the school to draw enough attention to get police to come to help my daughter because I wasn’t getting the help I needed from the SRO [school resource officer] or the principal,” Smith said.

”Where’s the ambulance? Why do you have my wife and daughter trapped in a room that they’re not allowed to talk, and you have me at the other side of the door in a standoff?” Smith continued.

”Basically, we were escorted off the property, told we were no longer allowed to be on school property at that point,” the outraged father said. ”We were told to report to the sheriff’s office, which is what I wanted to do all day. We were assigned an SVU [a special victims unit] detective.

”The interview took place, the rape kit was done the very next morning and that was pretty much the last we ever heard from the school. Summer came, and it was turned over to the law enforcement,” he added.

As of right now, the cases is still moving through the courts. Then the suspect in the Smith case, who they believed to have been under house arrest, was actually attending a different school and was taken into custody over another sexual assault.

”That’s what kicked off — people putting two and two together. We were very careful to talk to anybody about it. It just ran like fire. I do know that there’s a news agency that reached out from Britain, I believe, to the Loudoun County Sheriff’s, and they did confirm this: that it is, in fact, the same boy,” he stated.