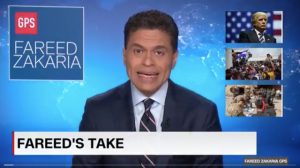 CNN’s Fareed Zakaria just broke away from the overall narrative this anti-Trump news network promotes on a near non-stop basis and actually said that President Trump’s comments on asylum are right.

If you stop and listen closely, you can hear all the higher-ups at the company screaming their guts out and working up all kinds of nasty punishments for Zakaria for daring to go against the grain and give Trump props for a policy stance, especially one involving immigration.

Zakaria, who opened the segment by noting that he was not a fan of Trump, said, “It pains me to say this, but he is right, that the United States faces a crisis with its asylum system.”

“Democrats might hope that the out-of-control situation at the southern border undermines Trump’s image among his base as a tough guy who can tackle immigration,” Zakaria said. “But they should be careful. It could actually work to the president’s advantage.”

“Since 2014, the flow of asylum seekers into the United States has skyrocketed,” Zakaria continued. “Last year, immigration courts received 162,000 asylum claims. A 240 percent increase from 2014. The result is a staggering backlog with more than 300,000 asylum cases pending and the average immigration case has been pending for more than 700 days. It’s also clear that the rules surrounding asylum are vague, lax and being gamed.”

“The initial step for many asylum seekers is to convince officers that they have a credible fear of persecution in their home countries,” Zakaria added. “And about 75 percent meet that criteria. Some applicants for asylum have suspiciously similar stories using identical phrases. Many simply use the system to enter the U.S. and then melt into the shadows or gain a work permit while their application is pending.”

“If things continue to spiral downward and America’s southern border seems out of control, Trump’s tough rhetoric and hard line stance will become increasingly attractive to the public,” Zakaria concluded. “Keep in mind, that the rise of populism in the Western world is almost everywhere tied to fears of growing out of control immigration.”

Watch: @CNN host @FareedZakaria: "It pains me to say this, but Trump is right (about asylum claim abuses)"

While this last comment smacks of obvious liberalism, he’s actually right. One of the main reasons folks loved Trump’s campaign was because he dared to speak the truth about illegal immigration and promised to try and do something about it, a promise he is currently living up to in a number of ways.

Illegal immigration is a serious problem for our country. Folks with criminal records are pouring into the nation and running wild, hurting people, stealing, mooching off the system and engaging in all sorts of bad behavior.

Many are bringing diseases with them. Others are illegally purchasing children to use to cross the border and claim asylum. It’s disgusting.

This is why Trump has taken such a hard stance and must continue to do so.