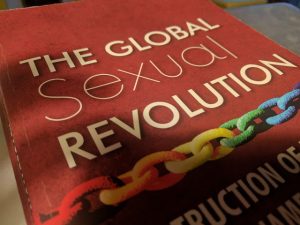 The basic ideology of the sexual revolutionaries is the belief that a superior and respectable society should: Separate sex from procreation, separate both sex and procreation from marriage, and obliterate all differences between men and women, except those individuals explicitly choose.

Mindy Belz, senior editor of WORLD Magazine rightly opines: Apparently sex isn’t for kicks anymore. From the halls of East Coast academic institutions to the malls of mid-America and the West Coast back lots, for decades now sex for sport has been taught, modeled, and marketed. Serial sex partners; sex outside of marriage; sex as an initiation rite onscreen, on campus, and to get ahead seemed a norm we could live with. The sexually pure became oddballs and losers

Then the tables turned abruptly this year, and sex became sobering front-page business as accounts of office intimidation, sexual assignations, sodomy, and even rape felled in swift succession titans of entertainment, politics, journalism, and business.

By one count, the current inquisition into sexual misbehavior has hit 36 men in high-powered positions during the six weeks following the October downfall of Hollywood producer Harvey Weinstein. Like Weinstein, many of them took swift leaves of absence or faced suspension or outright firing. In Los Angeles, New York, Scotland Yard, and elsewhere, authorities launched criminal investigations into the most egregious cases.

The dominoes continued to fall as Sen. Al Franken, D-Minn., agreed to resign his seat under pressure, while three Republican members of the House and longtime Democratic lawmaker John Conyers resigned over sexual impropriety allegations.

From the Whitehouse to the Statehouses, sexual misconduct in state legislatures begin to fall as well. In Kentucky, state House Speaker Jeff Hoover stepped down over a sexual harassment settlement with a female member of his staff. In Massachusetts, Senate President Stanley Rosenberg took a leave of absence after four men accused his same-sex spouse, Bryon Hefner, of groping or kissing them while bragging of his access to power. In Ohio, freshman lawmaker Wes Goodman, cheered as a millennial face for family-values voters, resigned after acknowledging inappropriate behavior, allegedly soliciting sex from men.

The sudden disgrace of House of Cards star Kevin Spacey, and comedian Louis C.K. has put hundreds of people out of work in the entertainment industry. Today show host Matt Lauer’s abrupt exit from NBC jeopardized the network’s $500 million in revenue generated from the program.

In spite of this being an impossible fantasy, the militant sexual activists continue to press their “liberation movement” onto society. At the present they have gotten virtually all the branches of our government, the media, academia, big business, and entertainment on board to create and perpetuate their radical remaking of our world.

Many of the most militant activists are drunk on their own power. Look at the “trans-activists” getting the city of New York to place onerous fines on people for using the wrong pronoun. Look at the college students, getting professors fired for insufficient conformity to the ever-changing standards of “sensitivity.” Look at the gay activists suing small Christian businesses, as if there were a constitutional right to get your picture taken by the photographer of your choice. These militants are intoxicated with power.

We must see the Sexual Revolution for what it is: a tyrannical movement that resents the limitations of the human body, especially those caused by our maleness and femaleness.

In 2012, Gabriele Kuby, a German sociologist released her book titled The Global Sexual Revolution. In its well-documented 300 pages, she makes it crystal clear that the sexual revolution has been every bit as wide-ranging and destructive as other fateful events such as the Russian revolution and the French revolution. The trouble is, the sexual revolution shows no signs of abating, but in fact is getting worse, damaging everything it touches.

In his review of the book, Bill Muehlenberg notes: All the indicators and hallmarks of this revolution are carefully covered, including the gender bending agenda, the pornification of society, the push for all things homosexual, comprehensive sex education for children at the earliest ages, the relentless assault on marriage and family, abortion on demand, and so on.

The fantasy ideology of the sexual revolution must be stopped. For as sex goes, so goes the family. As the family goes, so goes every other institution. Sexual norms have a decisive influence on the whole cultural edifice.

Marriage and physical intimacy is a window into the heart of God. It is to be a foretaste of the final union of the Bridegroom and His Bride in and eternal bliss. All mankind’s perversion of sex stems from the sinfulness of the human heart and a reluctance to be in a passionate, dependent, intimate, satisfying relationship with a Loving Father God!

YO PATRIOTS: Are You Buying The Story Of This Federal Investigation Into Rep Cuellar?
January 21st, 2022 Clash Daily

Taxes in California are projected to DOUBLE as the failed state forces residents to pay $1,000 a month for Universal Sick Care
January 21st, 2022 DC Dirty Laundry