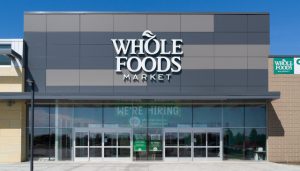 A disabled teenager, along with her mom and her nurse, were booted out of Whole Foods in Vienna, Virginia after some of the staff who work at the location noticed the girl was not wearing a mask, despite the fact she had a medical exemption.

Teresa Schultz, whose 14-year-old daughter suffers from high-tone cerebral palsy and is bound to a wheelchair due to being a quadriplegic, spoke with The Federalist and stated that two employees at the market approached her family and told them to leave.

“They said, ‘You can’t be here with her,’ and I said, ‘Excuse me?’ They said she had to have a mask on and I said, ‘Can’t you see she is in a wheelchair and is exempt from the mandate?’ I told them that it’s the law. [One of the employees] said it wasn’t and I said that you don’t want to go here,” Schultz said to the conservative leaning outlet. “I didn’t want to get my daughter upset because she is nonverbal. He said we have to leave, so we just left. I was so upset, and the nurse and I were like having heart palpitations. We were so upset. Never in the last year have we been asked to leave anywhere, and nobody has even questioned it because it is very apparent that my daughter is in a wheelchair, is nonverbal, and cannot wear a mask.”

As the Federalist reported, Teresa’s daughter, Mary, is exempt from wearing a mask under section E, clause eight of Virginia’s amended mask mandate, which is in effect until June 20, 2021:

“We’ve tried to put a mask on her, but she just rips it off her face. She won’t tolerate it. Our daughter does not have any fine or gross motor control, and she has a form of CP that is high-tone so her muscles are very tight,” John Schultz, Mary’s dad, said. “Groceries are an essential service and I would expect that if someone arrives on wheels that we get the benefit of the doubt. I can’t imagine this is the first time they’ve dealt with someone with medical issues not wearing a mask. It’s really odd.”

“When I first called the store I got the customer service manager, who happened to be the one who kicked Teresa and our daughter out of the store. I told him about the original mask mandate and the clause about persons with medical issues being exempt. I quoted it and he doubled down,” John said. “…He bounced me to another manager in the store who apparently was senior to him, and he and an assistant manager told me that the person was wrong to kick me out of the store. It sounds like they need some staff training and some empathy. People like [my daughter] really should not be subject to this kind of treatment.”

Heather McCready, a corporate spokesperson for Whole Foods said, “I can confirm that the Vienna Store Team Leader has reached out to the family, apologized for their experience, and had a good conversation with them. We look forward to welcoming them back to our store.”

This is what happens when you force people to live in complete and utter fear for an extended period of time. The more ignorant and uneducated become mask Nazis.

Time to end the fear and open up everywhere. That way these situations will be a thing of the past.