Falling on Her Own Sword: the Zoe Saldana Story 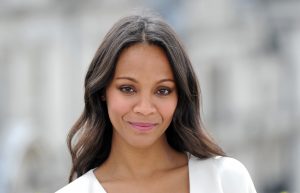 Did you know that four years ago, Zoe Saldana starred in a movie playing singer/songwriter and civil rights activist Nina Simone?  I didn’t either, at least not until today.  And the only reason that it came to my attention is because apparently, Saldana is the latest and greatest in the long list of Hollywood actors who are apologizing for the roles they’ve played.  Are you ready for this?  Saldana has apologized for darkening her skin to play Nina Simone.

Now, some of you out there are raising an eyebrow at your screen.  “But,” you’re saying, “Zoe Saldana is black.  Nina Simone was black.  What the hell are you talking about?”  Hey, don’t shoot the messenger: I’m just reporting the facts as I hear them.  Apparently, the fact that Zoe Saldana’s skin – though black – is lighter than Nina Simone’s was, and because in an effort to look a little bit more like her fellow African American character Saldana darkened her skin – all of that is enough to make her decision to play the character at all a bad one.

“I should have tried everything in my power to cast a Black woman to play an exceptionally perfect Black woman,” she said recently.  Later, she followed it up with: “I thought back then that I had the permission because I was a Black woman.  And I am.  But it was Nina Simone, and Nina had a life and she had a journey that should be honored to the most specific detail, because she was a specifically detailed individual.”

And.  I.  Am.  Every once in a while, do you ever look at someone for a really long moment to see if they’ll realize what they just said?

Well, I’ve got bad news for all you swarthy, deeply-tanned up-and-coming actors out there.  When it comes time for them to make the great biopic of the 21st century and cast someone to play the role of me, you all will be left in the dust.  Because, you see, you’d have to lighten your skin considerably to be as white as I am, and that’d be just racist as hell.  DON’T DO IT!

Now what kind of nonsensical precedent is being set here?  When you say that a black woman (you’ll note that I don’t capitalize “black” in the same way that I don’t capitalize “white”) can’t play another black woman…because one of them is darker black than the other, what are you really saying.  In other words, where does that line of thinking lead.  Because I’ve got news for you: the slippery slope is often touted in arguments for being a logically fallacious way to approach a subject, and thus it has passed into the American collective consciousness that the slippery slope is always a fallacy.  It’s not.  Lots of scenarios can be loaded into that particular rhetorical gun and fired to test their vector.  If Zoe Saldana – who, I must stress again, is a black woman – shouldn’t play another black woman because her skin pigmentation isn’t quite right, then doesn’t it follow that at some point the only way you can shoot a film about Nina Simone is to resurrect her from the dead and have her play herself?

Because the next actress isn’t going to have quite the right nose, or her eyebrows are going to be spaced a little further apart.  Or maybe she won’t be able to sing like Nina Simone.  Or – here’s a good one – what if she only identifies as a woman, but is actually a “person with a penis”.  (Did I cover my WOKE bases properly there?)

Hollywood is slowly – or maybe not that slowly – eating itself.  The years of chasing its own tail are long over; it caught the tail and has been chewing ever since.  Just currently, it’s got its head up it’s own butt, so I guess it’s eating from the inside out…ugh, just grossed myself out there.  Point is, Hollywood is fast approaching a tipping point where it will cease to exist purely by dint of self immolation in the service of the god of WOKE.  And you know me, there’s nothing I like better than dancing over the grave of an institution that has wrought far less good than bad on our fair land.  So my suggestion is this: why don’t we start a new Hollywood?  We can do it here in Texas, and let those folks in California slowly whip themselves to death for daring to commit a sin so heinous as honoring another human being by playing them in a movie.