FAKE NEWS: No, There Is No Real Call to Get Bill Maher Fired as “Revenge” for Roseanne 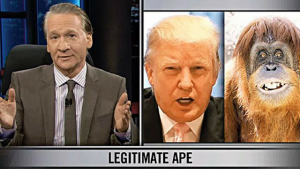 The Roseanne scandal has been whizzing by at lightning speed over the last few days, and it appears to have it’s own fake news story now to boot.

A number of mainstream sites are claiming that conservatives are calling for Bill Maher to be fired from HBO as “revenge” for Trump supporter Roseanne Barr’s firing over her recent racist tweets about Valarie Jarrett.

“Roseanne Fans Want Bill Maher Fired From HBO For Comparing Trump To An Orangutan,” ‘Roseanne’ fans call for Bill Maher to be fired after he joked Trump is part orangutan,” and “Right-wing pundits want revenge for Roseanne’s firing, and they’ve set their sights on, um, Bill Maher,” read the headlines.

The quick answer is, not really. As far as I can tell, a few right-wing pundits simply pointed out that Roseanne was fired over comparing Jarrett to “Planet of the Apes” while decidedly left-wing Bill Maher compares the President to an orangutan, and Twitter blew up, echoing this point.

These are the Tweets that every article on this “call” for Maher to be fired referenced:

So I assume that @HBO is going to fire Bill Maher now, or is there double standards in the media industry🤔 https://t.co/JknLS8iX0z

Wait, Bill Maher makes comparisons to Trump being a gorilla all the time?

Bill Maher is a liberal, Roseanne is a free-thinking Trump supporter

Barr herself retweeted a meme depicting the two jokes side by said, as we mentioned earlier today.

Let me ask you something, though. You may or may not agree with these gentlemen that it is right to defend Roseanne, and that’s fine. But let’s be real–do you see one “call for Maher to be fired”?

This is the same tune conservatives have been singing for a long time now, y’all. The left loves to be outraged over anybody even remotely aligned with the right (and especially a Trump supporter) saying…basically anything they don’t like.

So, it should be noted, they’re positively thrilled that Roseanne said something so blatantly degrading about a person of color. This is their big payday. They’re going to milk this thing as long as they can.

And they’ll happily find a way to twist a few conservative figures comparing Maher’s jokes to Roseanne’s as a bold defense of white supremacy and racism. Most likely knowing full well the angry masses might very well start calling for Maher to be fired based on their headlines. Because that’s the narrative, and that’s always the narrative, and it’s the press’ job to maintain that narrative.

But Maher isn’t exactly a favorite of the SJW left.

It is important to point out the way they are fabricating a call to have Maher fired because Maher himself is, in fact, a longtime critic of political correctness and proponent for free speech. He is far from right-wing, but he does share those values with many conservatives, and he’s said plenty of things the left hates.

“Bill Maher is the first – and usually one of the few lefties – to defend conservatives when the outrage mob comes after us,” writes Brodigan from Louder With Crowder.

“Issue by issue, he’s wrong about a lot. But Maher is an ally when it comes to the thought police (see Bill Maher Defends Laura Ingraham Against Leftist Boycotters and Bill Maher: You’re Not Woke, You’re Just a Douchebag),” he explains.

“When it comes to free speech, he’s an absolutist. Targeting him because of a joke he made about Trump is misguided at best. A pathetic way to excuse what Roseanne said about Valerie Jarrett at worst,” he adds.

It’s a shame we’ve gotten to this point in our national dialogue where we’d rather be outraged and angry than sift through the truth and have some honest discussions about difficult topics and common interest, while taking responsibility for our own mistakes and biases.

But the way things are going, it seemed like that possibility went out the window in the fateful year of 2016.