Fake News in an Alternate Universe 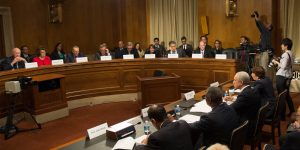 Come with me, for just a little while, on a trip into an imaginary world. It’s a place where politics reign supreme, and the Constitution is seen as merely the mad ramblings of dead, white slave-owners. If we were staying longer and intermingling with the work-a-day joes, we would learn that no one knows different because that hallowed document was written in cursive, which is no less daunting to this population than the Enigma code used by the Germans during World War II.

Because our time and wordcount are limited, however, we’re only going to look at where the government stands in this parallel world. We appear to be on the second floor of the Dirksen Senate Office Building in Washington, D.C., so let’s see what’s in this room, number 226. Ah. Just like in our own world, this is where the Senate Judiciary Committee meets. It seems we’re in luck. They’re currently grilling the President’s nominee to the 7th Circuit Court of Appeals. Let’s sneak into the back and listen in.

Okay, the nominee is Rafil Alzubaidy, a law professor at Notre Dame and a devout Muslim. This should be interesting! Looking him up on my phone tells us a couple of things right off the bat. First, ATT’s service is just as crappy in this world as it is in ours, so be patient while we wait on this download. Second, Dr. Alzubaidy has, it seems, some understanding of how judges should deal with cases that might conflict with their religious beliefs.

Back in 1998, the professor published a law review article in which he addressed the death penalty. As a devout Muslim, of course, he actively supports that most extreme and final punishment for a variety of offenses, not just first-degree murder. What Dr. Alzubaidy said back then was that if the capital punishment case came out of a state not allowing the death penalty – like Illinois, Maine, North Dakota, or Hawaii – a judge whose strongly-held religious beliefs demanded punishment by death should recuse himself, since properly interpreting those particular states’ laws could force him to choose between the law of the land and the laws of his religion. 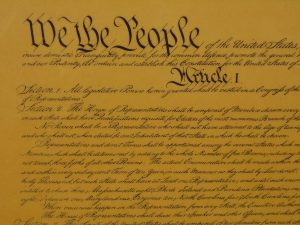 That seems like a reasonable assertion. This guy might just have his head screwed on right. Let’s see what the Senators have to say about the good professor. It looks like Senator Charles Grassley, a Republican from Iowa, is the committee’s chairman, just like back home, and he’s about to go in for the kill here.

He’s cocked his eyebrow and turned down the corners of his mouth as he recounts Dr. Alzubaidy’s speeches and published articles. He has a particularly nasty scowl as he references the 1998 article.

“The dogma,” he says with a sneer, “lives loudly within you. I’m concerned that it might take priority over the impartial administration of justice.”

Not to be outdone, Republican Senator Orrin Hatch of Utah, a devout Mormon, jumps in to ask, “Dr. Alzubaidy, do you consider yourself an orthodox Muslim?” The Senator’s comments indicate strong concern that the nominee’s religious beliefs might interfere with his ability to objectively oversee the proper interpretation of the law.

Well, it seems that the conservatives over in this world are every bit as hateful as the leftists accuse our conservatives of being. Let’s look and see if we can find a reaction on social media or any of the “news” sites. Look at this! Just like what would happen in our world, the left is going bananas.

CNN is reporting that Republicans have used religious beliefs to disqualify a federal nominee. MSNBC is already screaming for the President and every single Republican Senator to be impeached. Looks like this is going to be a bloodbath, so we’d better bug out before we find ourselves stuck in this crazy place.

Whew! We made it back. Wonder what happened while we were gone? I’ll be darned. It seems that a Notre Dame law professor, Amy Coney Barrett, nominated by President Trump to the 7th Circuity Court of Appeals went before the Senate Judiciary Committee. Hmmm. I guess we visited a mirror world of our own, not a parallel one.

Apparently, Senator Dianne Feinstein, a Democrat from California, took umbrage to Ms. Barrett’s religious beliefs, asking the same question Senator Grassley asked in that other world. Imagine that! Also, Senator Dick Durbin, a Democrat from Illinois and a practicing Catholic, demanded to know if Barrett considered herself an Orthodox Catholic, questioning her ability to balance her religious beliefs with the demand of objectivity put on all judges.

Oddly, not a peep came from CNN, MSNBC, or any other mainstream “news” outlet while we were away on our journey. The ACLU appears to have been too preoccupied with other concerns to notice that U.S. Senators took it upon themselves to use a judicial nominee’s religion to suggest she’s not fit to serve on the federal bench. No other Democratic Senators voiced opposition to something clearly prohibited by the Constitution.

Had any Republican on the Judiciary Committee here in our world had even questioned a Dr. Rafil Alzubaidy like we saw on our jaunt to the mirror-world, the wailing and gnashing of teeth from the left would be shrill enough to shatter glass and rupture eardrums. The only proper response would be for every Republican Senator and Representative to resign and yield their seats to a more fair-minded and tolerant Democrat.

It’s a good thing the left’s war on Christianity is nothing more than fake news. Otherwise, I might be worried.