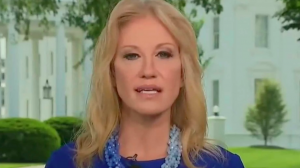 Banshee Pelosi is at it again.

Just when she gets another opportunity to sit at a table with President Trump and talk like a pair of grown-ups, she has to go and shoot the operation in the foot.

Her declaration that the president is engaged in a “cover-up” made the guy pretty hesitant to expect rational, respectful discussions with her, so he wasn’t having it. Cue the Democrat shock and awe at the “loose cannon” and his “childish antics”.

If you ask White House counselor to the president Kellyanne Conway, however, you’ll get a drastically different story than the one Pelosi has been whining to the media with—as well as a bonus bit of info about how the House Speaker treats people (hint: she’s about as nice as she seems. Not very.)

“Let’s face it; she’s the sixth most rich member of Congress. She treats everybody like they’re a member of her staff. She treats me like I’m either her maid or her driver or her pilot or her makeup artist,” Conway said in an interview on Fox News. “And I’m not. I said to her, ‘How very pro-woman of you,’ per usual, because she’s not very pro-woman, she’s pro some women, a few women.”

Conway was asked, “What happened in the White House yesterday?” referring to the Rose Garden incident and Pelosi’s “cover-up” claim shortly before the meeting. “You were there and actually had an exchange of words with the Speaker yourself.”

I did. And all these ridiculous stories, “The president was in a rage,” “He’s fuming,” “He stormed out,” “Temper tantrum,” there was none of that. He actually never raised his voice. He came in, sat at the end of the table in the Cabinet room outside the Oval, and said, “Look folks, I want to do infrastructure; I want to do great things for this country. We’ve been doing great things for this country. But within this last hour you had a meeting and came out and said I’m engaged in a cover-up; that’s not true.”

But he took the case directly to Nancy Pelosi because she was the one who came to the mics and said that the president was engaged in a cover-up, which is nonsense. All she had to do was either move her meeting to later in the afternoon with her caucus where she’s under enormous pressure to get on with impeaching the president, which she has said she doesn’t want to do right now. Or she could have said, “I’m not going to talk to you right now; we’re on our way to the White House to work on infrastructure. Let’s meet again at 2 or 3 o’clock and I’ll give you the run-down of the whole day.

Conway also laid waste to assorted Democrats’ selective retelling of the incident and their slanted commentary:

But no; they can’t resist going out and giving a live running commentary of what her more outrageous liberal hell-bent-on-getting-this-president-out-of-the-White-House members are pressuring her to do. So the president said, “Let’s work on infrastructure,” and then he left very calmly, I want to emphasize that, because he never raised his voice a single time; he’s very polite, and said, “You can’t have two tracks; you can’t say that I’m engaged in a cover-up; you can’t want to impeach and investigate and then pretend you want to legislate. So get back to me when you’re done playing these games and I’ll be ready.”

And, lastly, Conway shared the dismissive, catty statements Pelosi made to her personally:

Then, Speaker Pelosi—nobody’s reported this yet, so I’ll give you some color. Speaker Pelosi went on and launched into some odd, self-curated history of infrastructure in our country. She talked about Thomas Jefferson, then she got to Teddy Roosevelt. And so when she was finished, I said respectfully, “Madame Speaker, would you like to address some of the specifics that the president talked about?” And she said, “ I don’t — I talk to the president. I don’t talk to staff.”

Well, apparently you don’t talk to the president either, now do ya, Nan?

I swear, our House of Representatives is being led by children.