Fact-Check: AOC Says Her Family Would Have “Starved” Under New Foodstamp Rules 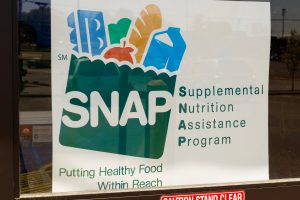 The Trump Administration has launched a long-overdue guideline change to the nation’s massive, unsustainable food stamp program, and far-lefties ain’t happy about it.

NY Congresswoman Alexandria Ocasio-Cortez, queen of the leftist “squad” in Washington, was among the loudest voices decrying the tighter new restrictions for the USDA-run Supplemental Nutrition Assistance Program (SNAP).

In a tweet on Friday, AOC claimed that her family would have “starved” if the new rule, which requires SNAP recipients to work a minimum number of hours each week, had been in effect during her childhood:

My family relied on food stamps (EBT) when my dad died at 48.

I was a student. If this happened then, we might’ve just starved.

Now, many people will.

It’s shameful how the GOP works overtime to create freebies for the rich while dissolving lifelines of those who need it most. https://t.co/WOrYvhfPj4

Either AOC didn’t give the article she shared a thorough read, or she’s being dishonest. If she had in fact read the article, she’d have plainly seen that only able-bodied adults under age 50 without dependents will be subject to the new work requirement.

AOC didn’t elaborate in that particular tweet whether her mother was unable to work for other reasons, but her statement is nonetheless a gross misrepresentation of the new work requirements.

Among the responses to AOC’s tweet were scads of folks recalling hard times or disability in which they relied on food stamps to put food on the table for themselves and their children. Because, you know, we’re apparently ignoring the fact that this rule won’t affect children, their parents, or the disabled. Thankfully, the fine People of Twitter™ have been more than helpful:

The rule applies to able-bodied adults between the ages of 18 and 49 who do not have dependents.

The rule wouldn’t apply to parents with minor children, the elderly, or disabled people.

As for the new rule, Agriculture Secretary Sonny Perdue predicts that it will actually help SNAP recipients to become more self-reliant, which is the goal of safety net programs in the first place.

“We’re taking action to reform our SNAP program in order to restore the dignity of work to a sizable segment of our population and be respectful of the taxpayers who fund the program,” Perdue said on Wednesday, according to Townhall. “Americans are generous people who believe it is their responsibility to help their fellow citizens when they encounter a difficult stretch. That’s the commitment behind SNAP, but, like other welfare programs, it was never intended to be a way of life.”