Facing Massive Exodus, NY Will Likely Give Up A Seat In Congress. Dems Want It To Be AOC’s. 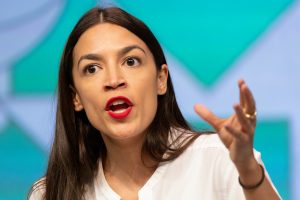 As New York continues to ban or regulate every single personal liberty out of existence and tax the everloving heck out of what remains, the state is, unsurprisingly, hemorrhaging residents.

In fact, according to local conservative commentator Bob Lonsberry, New York has led the way in population decrease for four straight years.

Whether it’s due to taxes, draconian laws and regulations, or the fact that we’re just aborting a hell of a lot more New Yorkers before they have the chance to draw their first breath, it’s no surprise that people are jumping ship. But, if you ask our governor, Andrew Cuomo, he’ll tell you it’s because of our frigid weather.

“The body count of that war is enumerated by the census, with the overwhelming majority of those leaving New York being upstate Republicans harassed out of the state by externally imposed poverty, and state-government hostility to their culture and beliefs. There are two tribes in the state, and the city tribe has decided to push the rural tribe from its ancestral lands,” Lonsberry writes.

“This is a purposeful depopulation, and the New York diaspora is comprised primarily of political and economic refugees.”

In addition to being a fiscal disaster for a state that relies on taxing citizens and corporations into oblivion to pay for its massive welfare state and assorted projects, New York’s gargantuan loss of residents also means less federal representation.

Alongside California, Illinois, Michigan, Minnesota, New York, Pennsylvania, Rhode Island, and West Virginia, New York is expecting to lose at least one Congressional District upon the completion of the 2020 census.

Thanks to Trump, that census will now include a basic citizenship question. In Alexandria Ocasio-Cortez’ district, which is made up of almost 25% non-citizens, this could spell disaster.

Although Ocasio-Cortez is facing a barrage of GOP challengers in her bid for re-election, the district has not been represented by a red guy for over half a century. An anonymous Democrat in Congress called for a primary challenger to unseat AOC, but this just led to a massive influx of campaign donations from the leftist priestess’ adoring fans. Now, sitting on over a million in the bank for her re-election campaign, redistricting is the best chance America’s got at ousting this girl.

So, if New Yorkers continue to vote with their feet and expatriate, it will have the unintended benefit of drastically reducing their unflinchingly leftist voice in the government of the entire nation.

AOC’s dream of herself as the savior of democracy and the climate might not come true after all.