In a conflict that can only be described as a quintessential display of the growing divide between salt-of-the-earth, hard-working heartland conservatives and the left-wing, Silicon Valley yuppie who knows nothing of life before the internet, Duck Dynasty patriarch Phil Robertson has brutally slammed Mark Zuckerberg for Facebook’s censorship of his videos.

Robertson, whose CRTV show, “In the Woods With Phil”, has not been thrilled to find that despite the wild popularity of his Facebook videos, the social network, now notorious for censoring conservatives, has been censoring the famous outdoorsman.

Twice, when Robertson has posted a video showing how he processes first fish, and then duck, Facebook has hit the video with a “violent or graphic content” warning, as seen in this screenshot from Conservative Review: 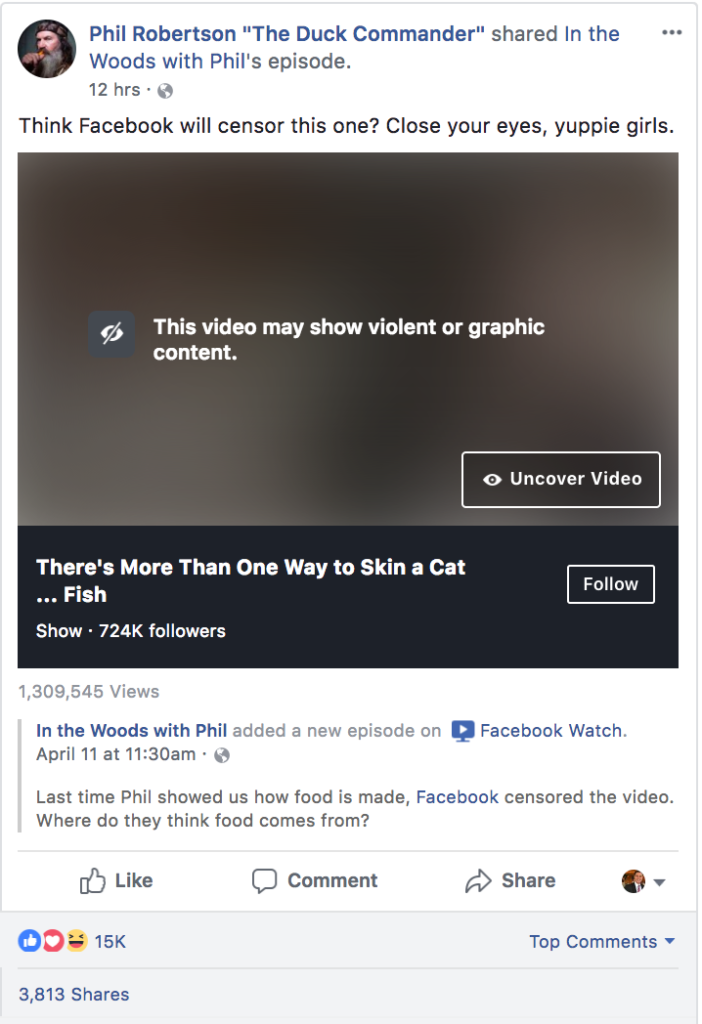 Well, after this second incident of unnecessary censorship, Robertson got fed up and called out Facebook CEO Mark Zuckerberg and his team in a Facebook live video.

“Skinning a catfish, and they censor it,” he said. “Mark, you and your team. I saw you coming on television when you were coming up the way going in there to testify before Congress for why you are discriminating and censoring free speech.”

“I looked at you and at your team, the little leftwing chicks, they all looked pretty spiffy. I could tell that they’d taken great pains that if they have any peach fuzz on their face … their faces were smooth. And I looked at you and so was yours. Your face looked like the buttocks of a 3-month-old baby.”

Facebook just censored my CRTV video. My response….Update: You can watch the censored video (and lots more) here: crtv.com/duck

Posted by Phil Robertson "The Duck Commander" on Friday, April 13, 2018

“You know what you would do, Zuckerberg? You would do what you’ve been doing,” Robertson continued. “Get off my back, son,” he finished.

One of the ironies of these types of videos being censored is that in the full episode, Robertson explains that these “yuppie” Silicon Valley types, for whom he clearly has little respect, have no idea what their fish looks like before they buy it at the store or order it at a posh restaurant. What he’s doing in the video, he explains, is simply what happens to the fish before it’s packaged.

“All these yuppies, when they finally get their fish, they’re frozen,” he explains. “They have what they call fish sticks. They’ll be little squares in a pack in the frozen food department.”

“When you live next to the river like we do, you never eat frozen fish, ever,” he continues.

But apparently, Conservative Review points out, seeing the process of preparing a fish for consumption is too “violent” for yuppie sensibilities, and they censored Robertson as they censor so many other viewpoints that they find offensive.

“As Zuckerberg admitted in his testimony,” Conservative Review writes, “Silicon Valley is an ‘extremely left-leaning place,’ and Big Tech’s ‘free’ platforms, like Facebook, Google, and Twitter are all run by progressives hostile to conservative points of view — and totally willing to shut them down.”

“This is why Robertson, Mark Levin, Steven Crowder, Michelle Malkin, and many more host their shows on CRTV, a pro-free speech platform where they’re truly free to speak their minds,” they add.

They also add that last weekend, Facebook removed the warning before Robertson’s video, explaining that it was “mistakenly applied”. Ha! Sure….

You can watch the whole video here:

There's More Than One Way to Skin a Cat … Fish

Last time Phil showed us how food is made, Facebook censored the video. Where do they think food comes from?Watch the full uncensored video: crtv.com/duck