Exiled Venezuelan Legislator To Bernie: “Try Venezuela For A Week Without Bodyguards” 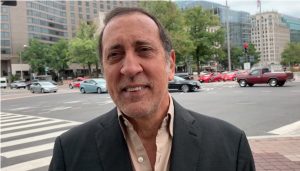 An exiled member of the Venezuelan National Assembly had a few words of advice to presidential hopefuls like Bernie Sanders who might want to see firsthand what President Nicolás Maduro has done to the socialist nation before working to enact any similar policies here.

In an interview with PJ Media’s Nicholas Ballasy, Assemblyman José Guerra was asked what he thought of Sanders, who had declined to refer to Maduro as a dictator until last month when he distanced himself from the dictator’s particular flavor of socialism.

In January, President Donald Trump recognized Juan Guaidó, the president of the Venezuelan National Assembly whom this writer believes to simply be Maduro Lite™, as the South American nation’s interim president.

According to Foreign Policy, as of February, nearly 50 countries recognize Guaidó as the legitimate president, while Maduro, unsurprisingly, still has the support of Russia, China, Iran, Cuba, Turkey, and a handful of other nations.

“I don’t know that Jesse Jackson and Bernie Sanders know in a very good way what is going on in Venezuela,” Guerra said, referring to Jackson’s attendance at a protest at the Venezuela embassy in Washington, D.C., in May, arguing against the overthrow of the Maduro regime.

“I suggest Bernie Sanders take a week and go to Venezuela without bodyguards and go to the street and speak with a cellphone and see what is going on with Bernie Sanders,” he continued, hinting at Venezuelan pickpockets who go for cell phones nowadays because their soaring hyperinflation has led to the virtual disappearance of cash.

“To equate what goes on in Venezuela to what I believe is extremely unfair,” Sanders said during a presidential debate last month, claiming that his ideology is more aligned with liberal governments in places like Canada or Scandinavia.

Wall Street Journal editor James Freeman argued back in March that Sanders has consistently tried to disassociate himself from radical, debunked Soviet-style socialism.

Except, you know, Sanders spent his honeymoon in the Soviet Union back in 1988 just before that regime crumbled, declaring upon his return that we should “take the strengths of both systems… Let’s learn from each other.”

Freeman also noted that back in 2003, Sanders signed a letter in support of Maduro’s predecessor, Hugo Chavez, the man responsible for taking Venezuela, then one of the most prosperous nations on the continent, and turning it into the dystopian wasteland it is today in just 14 years.

Ironically, Freeman points out, Scandinavian countries have made significant cuts to their corporate tax rates over the last few years, standing in sharp contrast to Sanders’ gargantuan tax hikes planned for corporations and the wealthy.

After passing a slew of expensive entitlements, Freeman continues, “Scandinavian voters then realized that their only hope of paying for them lay in the preservation of robust market economies.”