Exactly Why Is Beto O’Rourke Running Campaign Ads In Mexico? 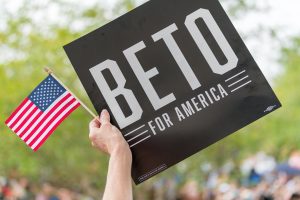 Once a headliner in the ever-expanding sideshow of 2020 Democratic hopefuls, Beto O’Rourke might be getting a little bit desperate to stay relevant as we trudge ever closer to the big show.

Beto’s poll stats, according to Real Clear Politics, have sunk to sixth place with the support of a piddly 5.6 percent of voters, down from the 9.5 percent support he had just a month ago.

Still, even amid downward-crawling numbers, folks are having a hard time comprehending a very strange move by the Beto 2020 camp: running targeted campaign ads outside the United States.

According to the Washington Free Beacon:

Facebook has for the past year allowed users to see, using the “info and ads” tab, where a group is targeting its sponsored posts. A screenshot of O’Rourke’s page captured by the Washington Free Beacon last Friday revealed he was paying to have certain posts viewed by Facebook users in Mexico.

Among the posts O’Rourke paid to blast out to Mexican users was an invitation to his Tuesday campaign stop at the Jacobs Center in San Diego, Calif. The details are posted on the event page in both English and Spanish. 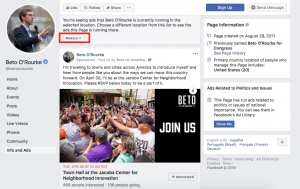 And, of course, since the O’Rourke campaign did not respond to the WFB’s request for comment on Mexican-targeted ad and instead chose to quietly remove Mexico from the locales where the ad would be shown to Facebook users, one can only speculate as to the campaign’s motives.

There is, of course, an upcoming campaign primary for Democrat voters living abroad, but Beto has reportedly made no mention of that event thus far.

And, just for funsies, the WFB checked other 2020 campaign ads to see if perhaps the error was somehow on Facebook’s end and others were targeting ads outside the United States. The only other 2020 contender to run ads outside the 50 states was our incumbent president, who apparently cares more about Puerto Rico (a territory of the United States) and his voter base there than Democrats.

Exhausting all other legitimate excuses Beto may have for doing even a shred of campaigning in Mexico, the Conservative Tribune had the cojones to consider the evidence in light of the Texan’s extreme stance in favor of open borders:

Setting aside that legitimate possibility, and given O’Rourke’s increasingly sharp rhetoric in favor of open borders — including tearing down existing border walls and barriers, and all but eliminating the Immigration and Customs Enforcement agency — one can only wonder if O’Rourke’s reported targeted ads in Mexico were in search of potentially illegal voters that would support him.

Add all of this to controversy surrounding texts allegedly sent by Beto’s campaign to help secure transportation for undocumented immigrants to vote and his tiptoeing around endorsing voter rights for non-citizens, maybe the Tribune’s theory isn’t too far off.

Until we hear from Beto, one can only imagine.