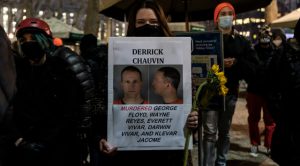 Former police officer Derek Chauvin has chosen not to testify on his own behalf, taking the Fifth Amendment instead.

Chauvin is currently on trial for the murder of George Floyd, which took place in Minneapolis, Minnesota last year and led to nationwide violence, rioting, and looting. Many businesses were destroyed in these events.

Floyd, a black man, was accused of using a counterfeit $20-bill, and when officers attempted to apprehend him, they pinned him to the ground. Chauvin, who is white, placed his knee on Floyd’s neck for more than eight minutes, footage showed.

Floyd died, and his death sparked nationwide protests and conversations about law enforcement’s use of force and their interactions with minority communities.

The defense has pointed to Floyd’s drug usage to claim that Chauvin was not actually responsible for his death.

One thing’s for sure. It doesn’t matter if the jury in this case finds Chauvin guilty or not, you can guarantee we’re going to have an explosion of Black Lives Matter “protests,” which will surely result in more destruction and violence.

Let’s hope that’s not the case, but it seems inevitable.