Even Warren’s “Cherokee” Family Recipe Was Fake. She Likely Plagiarized It From French Chef. 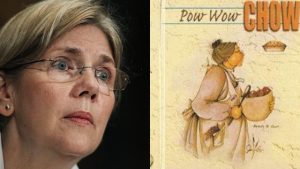 Is there anything authentic about Elizabeth Warren?

Her claims to have Native American heritage were hilariously put to rest this week as a genealogist determined she likely has somewhere between 1/64th to 1/1,024th Native American DNA.

In case you somehow missed the best thing to happen to the internet since Hillary Clinton watched balloons drop at the DNC.

Warren has, of course, been claiming to have significantly more Native American heritage than >.1%, an accolade she has previously used not only to claim she was the first woman of color to be tenured as a professor at Harvard Law School, but to contribute a crab recipe to the “Pow Wow Chow” cookbook and claiming the crab omelet was an old family recipe.

You know, from the wild plains crabs of Oklahoma.

It turns out that not only is Warren ill-equipped genealogically to contribute a recipe to any recipe to a Native American cookbook, she couldn’t even come up with an original recipe to falsely claim was an old favorite served in the Warren family wigwam.

She appears to have plagiarized it.

Boston-based radio talk show host Howie Carr has long been critical of Warren’s dubious claims of native ancestry, and he wrote a column for the Boston Herald following Warren’s DNA test announcement and reveled in the glory of the backlash she received over her proud proclamation of having a smidgen of native ancestry.

Carr noted that Warren — who identified herself as Cherokee — had submitted a recipe for Cold Omelets with Crab Meat for a Native American cookbook titled “Pow Wow Chow.”

Except, that recipe is virtually identical to one published years earlier in a New York Times haute cuisine cookbook by French chef Pierre Franey, and the recipe was said to have been the favorite of the British Duke and Duchess of Windsor … not exactly Native American royalty.

Picking up where Carr left off, the U.K. Daily Mail looked deeper into the near-identical recipes and found that Warren’s submission — as well as others from her — could very well have been plagiarized from already existing recipes.

It turns out that her herbed tomatoes and crab with tomato recipes were also plagiarized, from a 1959 issue of Better Homes and Gardens and Chef Franey, respectively.

If we can’t trust her to know her family history or come up with her own cold crab omelet…what can we trust her with?