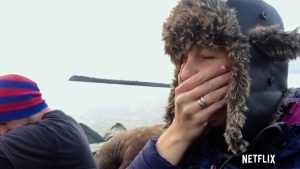 The climate change war is continually making individual liberty an endangered species, and the propaganda isn’t dying down.

In its latest hyper-progressive entertainment offering, Netflix has proffered Our Planet, a multi-episode docuseries about the supposed effects of anthropogenic climate change (fancypants sciency word for “manmade global warming”) on several of the planet’s wildlife and their habitats.

Helmed by none other than BBC’s most respected misanthropic greenie, David “Humans Are A Plague” Attenborough, Our Planet came under heavy scrutiny shortly after its release but, if you ask me, for all the wrong reasons.

In its second episode, Frozen Worlds, the show’s crew visits a stretch of Russian coastline where they watch a gruesome scene unfolds: several walruses attempt to scale a steep, rocky cliff, which, if you’re at all familiar with basic walrus anatomy (hint: they aren’t blessed with the best climbing gear), goes exactly how you’d expect it to.

In case you’re into watching that kind of thing, you can see Netflix’ behind-the-scenes clip of the controversial walrus scene here. If you’re like me and don’t find it particularly entertaining to watch animals die painful deaths, allow The Independent to give a synopsis instead:

The segment highlights that walruses have poor eyesight out of water, but can feel the presence of the other animals at the bottom of the cliff – and are left looking for a way to return to the sea in order to search for food.

A walrus is then shown half-jumping, half-falling down the cliff, painfully bouncing against the rocky surface. Several other animals follow suit, suffering the same tragic fall.

“In their desperation to [return to the sea], hundreds fall from heights they should never have scaled,” Attenborough narrates.

The sequence ends with close-ups of the walruses’ still bodies lying at the bottom of the cliff.

Naturally, viewers were very distraught after seeing the questionable scene. It’s one thing to watch Planet Earth, a favorite, and root for the prey animal to escape the ferocious predator only to watch the poor guy become dinner. It’s another animal entirely (puns always intended) to sit back and watch walruses die slow, painful deaths.

Now, in keeping with the running theme of the show, the Our Planet crew and the Russian scientist with which they consulted state that the walruses are attempting such an impossible feat because global warming has caused the masses of ice on which walruses usually while away the hours to melt and shrink, forcing them to find new stomping grounds.

“There’s probably two or three hundred dead walrus on probably a half-mile stretch of beach here,” a cameraman explains in the video clip. “They’re exhausted because they’re having to swim a hundred miles now to get to food and then coming back here because it’s the only place to sleep.”

“They used to sleep on the ice and dive down, eat the food and sleep on the ice,” he continued, “And now they’re swimming a hundred miles, coming to this place and climbing cliffs, getting exhausted and falling down and either being killed falling or crushing each other because there’s several thousands crammed onto little tiny bits of beaches.”

This probably seemed like an open-and-shut case for the documentary’s crew and producers, but as with the rest of the “hard evidence” propping up manmade global warming, there’s a good bit of fact-twisting going on here.

Some critics accuse the producers of emotional manipulation and twisting facts … and that includes some zoologists and prominent environmentalists, who claim the walrus scene is out of context.

For instance, Dr. Susan Crockford went public this week saying the walruses filmed for this scene were falling off the cliff to escape polar bears … not because climate change is reducing their natural icy habitat. Patrick Moore, the co-founder of Greenpeace, backed that up too.

In an interview with The Telegraph, Dr. Crockford, a seasoned zoologist, called Our Planet‘s explanation of the scene “contrived nonsense”, “fiction and emotional manipulation at its worst,” she said.

Even Greenpeace’s co-founder Patrick Moore attempted to at least require a basic standard of fidelity to the truth from his fellow environmentalists:

This must be the most ridiculous thing ever ascribed to “climate change”. Next thing Sperm Whales will be leaping to their death from high cliffs they should never have scaled. Maybe a late April Fool’s joke? https://t.co/b8LYezHAsb

I’m sure there’s plenty of ground I wouldn’t share with Moore, but holy buckets do I appreciate the hilarious honesty.

You guys, when the Co-Treehugger Supreme of Greenpeace calls you out, you might just want to stand up and re-evaluate your methods.

Of course, Netflix and the series producers are standing by their work because, uhh, they didn’t see any polar bears around. Plus, they worked with a scientist, and scientists are always right when their findings align with our narrative.

Nevermind the fact that the evidence for manmade global warming is shrinking faster than the supposed ice the walruses call home. These people have an agenda to advance, they ain’t got time for facts.