Even More Women Speak Up Against Handsy Joe Biden, Excuse His Groping As “Workplace Inequality” 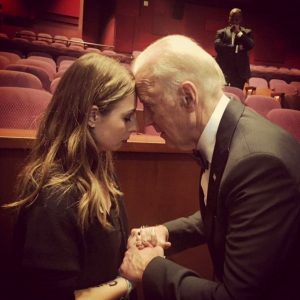 I wish this was the tiniest bit surprising, but alas, three more women have spoken up as alleged victims of Joe Biden’s incredibly creepy touching. While assorted social media users over the years have already compiled evidence of Biden’s cringe-inducing penchant for groping and hair-sniffing for anyone to see, the MSM slow train is finally pulling into the station as more and more women speak up.

In a Wednesday night Washington Post article, a woman named Vail Kohnert-Yount claimed that Joe majorly invaded her personal space when she was working as a White House intern in 2013.

“He then put his hand on the back of my head and pressed his forehead to my forehead while he talked to me,” Kohnert-Yount said. “I was so shocked that it was hard to focus on what he was saying. I remember he told me I was a ‘pretty girl.’”

Like Biden’s other accusers, Kohnert-Yount says she doesn’t dare grant herself “abuse victim status” or consider Biden’s creepery to be anything serious: “it was the kind of inappropriate behavior that makes many women feel uncomfortable and unequal in the workplace.”

Now, here’s where I’ve gotta split with you, Ms. Hyphen-Hyphen. Maybe you haven’t seen the videos, but I’d say you should. No one needs to equate handsiness with rape (though I firmly believe Joe’s Democrat sacred cow status is the only thing holding the ultra-feminists back from that one) but let’s not minimize the dude’s seriously wrong behavior to a workplace equality issue. Are you nuts?

Anywho, two other women have spoken up, but it’s still early in the day. Sofie Karasek, whose photo of Biden cramming his forehead into hers at the Oscars has made the rounds since it was taken in 2016; and Ally Coll, who says Joe squeezed her “for a beat too long” once while she was a staffer planning a reception party for Democrats back in 2008.

"We’re not lucky — we have survived and that’s why we were there." Sofie Karasek https://t.co/gcu7jlrcGa pic.twitter.com/4GLCj1c9LF

The three latest accusers each saw the tone-deaf video Biden offered as a non-apology after his first accuser’s story made headlines but, like the rest of us, they weren’t too deeply moved by it.

Social norms are changing. I understand that, and I’ve heard what these women are saying. Politics to me has always been about making connections, but I will be more mindful about respecting personal space in the future. That’s my responsibility and I will meet it. pic.twitter.com/Ya2mf5ODts

Oh my goodness, y’all. “Social norms,” I kid you not. The dude wants to blame his gropefest on being a baby boomer? Uhh, sorry buddy. While I wasn’t even a twinkle in my dad’s eye back in Biden’s younger days, I think it’s safe to assume (based on the many fine baby boomers I’ve known who have never attempted to inhale my hair) that this is something a little more serious than social ineptitude.

And, yet, Creepy Joe accusers still treat him with kid gloves and say they “appreciate his attempt to do better in the future” and that he “still didn’t take ownership in the way that he needs to” and insist that this is an issue of inequality in the workplace, not a raging creepfest.

The lemming mentality of the left has been so deeply ingrained in their character, their antics are never been very surprising. Still, I can’t say I’m not disappointed to see the Trump-bashing, Kavanaugh-hexing, #MeToo Amazonian warrior princesses giving their sacred cow a free pass.

But, hey, at least this will make Trump 2020 go a whole lot smoother. There’s always a silver lining.