Even A Blind Hogg Can Find an Acorn: David Hogg Actually Says Something True 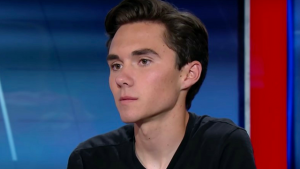 Little David Hogg took a break from calling law-abiding NRA members “terrorists” and rallying for your natural rights to be taken away to say something…legitimate.

Following the latest in a disturbing, decades-long trend of school shootings in our nation, David Hogg seems to have had a rare moment of clarity and actually recognized that the culprit of the shooting was a person, not a weapon.

A person whose name and picture are being blasted all over the media.

I don’t know the shooters name and don’t want to. If you agree, anytime you see a post with their name or face from news organizations post #NoNotoriety with one of the victim's names. We make these sick people known worldwide for their horrifying acts, let’s stop that.

“I don’t know the shooters name and don’t want to,” Hogg wrote on Twitter on Sunday. “If you agree, anytime you see a post with their name or face from news organizations post #NoNotoriety with one of the victim’s names. We make these sick people known worldwide for their horrifying acts, let’s stop that.”

Those who would typically disagree with him were quick to point out that he had finally struck some truth.

Of course, they were not without further critical suggestions:

Correct, DON'T Name Murders. However, its' important to note, DON'T Blame NRA for Violence when its' main cause is the absence of Prayer, God, Lack of TRUE USA History Teaching and Pledge of Alliance to the AMERICAN Flag in the public School system…

There is also the very obvious point that perhaps those who commit mass murder in a way that garners national attention aren’t the only ones who don’t deserve mass recognition either:

David Hogg certainly has no problem with his own name and face having been blasted all over the news for surviving a school shooting and then proceeding to blast, with excessive profanity, the very people who work hard to make sure every American is able to defend themselves from a would-be mass shooter.

But we’ve had plenty of opportunities to point out his fallacies, let’s give the kid credit where credit is due.

The fact that these killers go down in history digs much, much deeper into the disturbing trend of mass school shootings than our 200-year-old history of gun culture. David Hogg isn’t the first person to point this out.

I don’t have a lot of faith that he’ll stop with the fact-deficient gun control nonsense, but there is a tiny glimmer of hope when he can recognize it goes deeper than the evil, evil NRA. And maybe, just maybe, he’ll realize he’s not so different from concerned, law-abiding citizens who want our children safe and our rights intact.