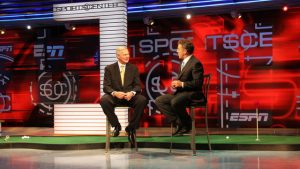 America has a rich tradition of loving and bonding over sports. Baseball is our national pastime, nothing could be more iconically American than a gluttonous Superbowl party, and even North Korean dictators love our basketball stars.

This is one reason it has been particularly devastating to our nation to watch sports get violently sucked into the raging culture war, from politicizing the National Anthem on the sidelines of NFL games to race-baiting rants on ESPN.

Sports do not need to be political, in fact, they ought not to be political. There’s nothing wrong with sports figures using their platform to promote issues they care about, sure, but we need to take a step back a realize that enjoying sports is one of the only things we can all unite over rather than be divided.

No matter who you are or where you come from, you’re likely going to be able just sitting back, drinking a beer, and enjoying a good game with anyone else, setting all politics and cultural differences aside to enjoy some good, clean, athleticism and competitive excitement.

Is that really so bad?

ESPN’s president, after years of apparently paying literally no attention to what his network’s viewers actually want to see when they tune in, has finally realized that perhaps all those dropping ratings and hemorrhaging subscriptions might have something to do with how outrageously politicized the network has become.

The sports behemoth has battled the head winds of an all-consuming political climate. Prominent personality Jemele Hill was suspended from the network last year for calling President Trump a white supremacist. The White House responded by calling the tweet “a fireable offense,” which fueled conservative critics of the network.

We’re not really sure where he’s been the last five years, but it appears he’s cracking down around the office and making sure employees are on board:

Pitaro said he prioritizes limiting political commentary. “If you ask me is there a false narrative out there, I will tell you ESPN being a political organization is false,” he said. “I will tell you I have been very, very clear with employees here that it is not our jobs to cover politics, purely.”

Pitaro also has told the league that ESPN does not plan to air the national anthem ahead of its Monday night telecasts. The policy is not a change from previous seasons, but the network articulated its plans directly to the league for the first time.

Finally, there might actually be somewhere on the television we can go to get away from all the political noise in an era when everything else is political.