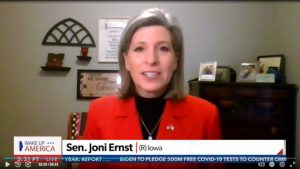 Sen. Joni Ernst, a Republican from Iowa, stated that President Joe Biden and Senate Majority Leader Chuck Schumer are going to be desperately searching for loopholes they can take advantage of to help enact the more “radical ideas” being pushed by leftists, even if the Build Back Better Act doesn’t have all the necessary votes without the support of Sen. Joe Manchin.

“I do think that the Democrats will keep pushing on this,” the Iowa Republican stated during a conversation on Newsmax’s “Wake Up America,” going on to add that the continued push is “unfortunate.”

“These are programs that we simply can’t afford,” she stated. “Taxpayers are already suffering from inflation this year. It’s not transitory inflation. This inflation is here to stay for quite a while, and until we get those problems solved, we shouldn’t even be taking this up. I hope that President Biden understands that, and again, it’s a very widely unpopular idea across the United States.”

Ernst said she hasn’t spoken with the West Virginia Democrat, but she is “thankful” that he is refusing to vote for the massive spending bill.

“Joe did the right thing,” the senator said, noting that polls conducted in his state demonstrated that residents didn’t want the bill.

“Americans don’t want this bill,” said Ernst. “It is a radical expansion of social welfare programs that we simply cannot afford.”

Meanwhile, Republicans will have the chance to take back the House and Senate in the 2022 midterm races and return checks and balances against the Biden administration, said Ernst.

“This administration has been heck-bent on instituting radical ideas and all of their climate change policies, which are harmful to American business,” said the Iowa senator. “This is an opportunity for us to step up to that challenge and make sure we’ve got good candidates and to seize on the moment to slow this radical agenda down.”

Ernst said she also thinks there are more Democrats beyond Manchin and Sen. Krysten Sinema, D-Ariz., who did not want the vote on the legislation to happen.

“[Manchin] is saving a heck of a lot of people by doing this, but I would say, Joe Manchin, you know you’re saving America as well,” said the Iowa Republican.