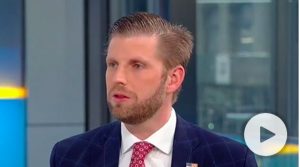 Eric Trump, son of President Donald Trump, recently made an appearance on “Fox & Friends” where he said that his dad would absolutely destroy former Vice President Joe Biden on the debate stage if he became the Democratic Party nominee.

Biden took home a victory in South Carolina on Saturday night, which he labeled a “real comeback,” no doubt hoping to carry some of that momentum into the upcoming Super Tuesday primaries.

Heading into key Super Tuesday contests, Sanders has led the overall race for delegates with 58 while Biden had 50. Sen. Elizabeth Warren, D-Mass., had eight and Sen. Amy Klobuchar, D-Minn., had seven. It takes 1,991 delegates to win.

Eric Trump said Michael Bloomberg is “fading” after a poor performance at the previous debates and that Tom Steyer spent $250 million dollars only to have 1% of support.

“I think my father would beat any of these people,” Trump said, speculating that Pete Buttigieg was “promised” something by the party or Biden in exchange for him ending his campaign Sunday night.

There’s no doubt in my mind that if Biden gets the nomination we are in for the most entertaining presidential debates held in the history of this country.

Just look at all of the gaffes Biden has made over the last few years — not to mention those made during his entire career — and you’ll see that President Trump has a nearly endless supply of material to use against him.

That whole “half of Americans killed by guns” nonsense? The hair leg pool story? This guy doesn’t stand a chance.

Here’s to hoping it happens so we can at least get a laugh out of this mess.