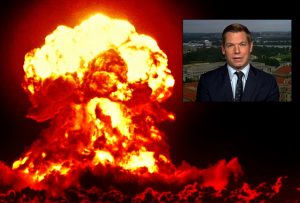 Well, folks, it’s been real. The second Democratic candidate (well, the first one I’ve ever even heard of) has dropped out of the race.

Rep. Eric Swalwell is blowing this popsicle stand and withdrawing his name from the pool of candidates headed to the big show in 2020. Someone pass the Kleenex.

I’m sure we’ll all miss his painfully awkward speeches, his thinly-veiled threats to confiscate guns from law-abiding citizens by extreme force, and, as Louder With Crowder puts it, his “melted Ken doll face.”

After consistent drooping in literally every single poll, Swalwell made his withdrawal from the race official on Monday.

I want thank my supporters & friends, my staff, & my family for making this journey possible. I’ll never forget the people I met & lessons I learned while traveling around our great nation. Though our campaign is ending our mission to end gun violence is just beginning… pic.twitter.com/voEJRpYd2R

“…our mission to end gun violence is just beginning…” What an ominous sign-off. But, I digress.

While Americans still have to deal with this dude in Congress, let’s take a moment to celebrate the fact that, at least for now, we won’t have to have him as President.

In the way of celebration, the People of Twitter™ have already commenced the festivities:

I need someone else to make fun of now. Must be polling at less than 1% and not be reasonable ever. Suggestions welcome.

Thankfully for Mr. Holbeck™, there are still about 85 bajillion other Dems who meet his criteria.

That sounds like a private matter, but I’ll allow it.

Ah yes, Eric will never forget the 18 people who showed up to hear his rousing delivery at the June 17 speech near @NRA headquarters. (I venture to say those 18 people won't either, as they all probably realized–at that very moment–the Swalwell campaign was over.)

Is it really a journey if the train never left the station?

See? I’m not the only person who had no idea who Richard Ojeda was or that he’d dropped out of the race first. It’s hard to keep track of all the kooks.

Probably less time than it took to type up that statement.

And, last but certainly not least:

Whew, we dodged a nuke there.