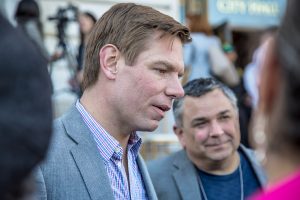 You might think I’m referring to the 2020 Democrat candidate sideshow, but not this time.

No, I’m talking about Rep. Eric Swalwell, whose Sunday speech at the Iowa Democratic Party’s Hall of Fame event was met with considerably less than the roaring applause the Californian candidate seemed to be expecting.

“But I will always be real with you,” he continued. “I will be bold, without the bull.”

That’s when it happened. And it was hilarious.

From The Daily Wire’s Ryan Saavedra:

Democrat presidential candidate Eric Swalwell: “I will be bold without the bull”

Swalwell pauses, appearing to expect applause from the audience

Oh, what I would give to have been in that room with a soundboard equipped with cricket chirps and a sad trombone. Maybe even some Simon And Garfunkel while Swalwell just stands there, pouting.

What a missed opportunity.

Honestly, it’s no surprise that the dude’s campaign is floundering. One of Swalwell’s most notable campaign promises is, after all, to confiscate semi-automatic firearms from their law-abiding owners.

I may not be an expert, but something about bursting onto the scene and suddenly declaring the owners of the hundreds of millions of semi-autos to be criminals overnight just doesn’t seem like something you do if you want to make friends and lead a mixed bag of a country like America.

According to Senior White House Adviser Kellyanne Conway, Swalwell is no threat in the upcoming primaries. “He literally doesn’t register in these latest #polls, either,” Conway tweeted. “A few candidates are at less than 1%. Swalwell is at less than less than 1%”