What dimension of perversion do you live in when you think it’s okay to explore the sexuality of a four year old child?

PinkNews used a photo of Prince George clutching his face while visiting a German helicopter compound with his father alongside an article headlined “People think Prince George looks fabulous in this new photo.” 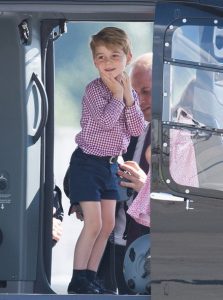 “Prince George has become a gay icon overnight — at least, that’s what some people — sorry, his subjects — are saying on Twitter” the article said.

Only a twisted mind could take an image of a child and describe it as an iconic symbol of a lifestyle that is defined by its sexuality.

PinkNews said: ‘Prince George has become a gay icon overnight. The monarch-to-be has always been cute and well-dressed, but one day before his fourth birthday, a photo of him excitedly holding his face changed everything.”

So there you have it folks. If you’re a cute, well-dressed child then you’re a gay icon. For a group that is trying to legislate and normalize a lifestyle and sexual preference statements like this are wildly hypocritical. If one were to accuse an effeminate man of being homosexual it could be classified as judgemental hate speech based on appearances. The inability to see a child that is expressively excited about his experience without espousing your agenda demonstrates a lack of mental and moral capacity that needs to be rebuked.

England already has a queen. Stop trying to give them another one. 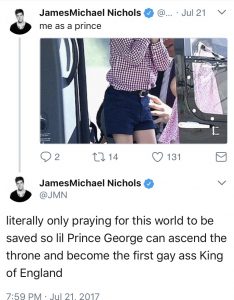 A Message To Pete Buttigieg: Hey Buddy Quit Playing House And Get Your Butt To Work!
Washington Exterminator

Brutality: Mother of Stroke Patient Arrested for Trying to Stay with Daughter After Brain Surgery
October 16th, 2021 Flag And Cross

Michael Cantrell - October 15, 2021
The Biden administration is currently taking action to restart former President Donald Trump's "Remain in Mexico Policy" in mid-November, which is a rule that...

Mosque Bombing In Afghanistan Leaves 16 Dead, Many Others Injured