EMPTY SEATS: The NFL Continues its Downward Spiral – Proof that liberalism kills everything it touches! 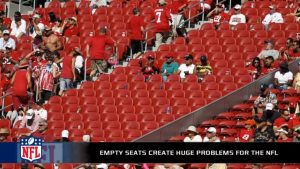 The NFL is just another example of how liberalism kills everything it touches. The league was hoping that the backlash would soon die down but apparently Americans are taking their boycott of football seriously. I know that many have criticized me for my outspoken stance on players kneeling but I refuse to be swayed from my opinion.  I truly defend the players’ right to protest and freedom of speech however not at the dishonorable expense of our flag and anthem. Ticket buyers apparently agree. Just take a look at the pictures below from around the league.

Breitbart.com reported that “stadiums could be seen with thousands of empty seats at kickoff, and, in some cases in the middle of the game.”  Adding insult to injury, the Cleveland Browns gave a prize away — to an empty seat.

It is not known what the prize was, but whatever it was, it’s quite sad the team has resorted to keeping fans happy at FirstEnergy stadium with giveaways. What’s even more sad is that the seat was empty. Several NFL stadiums are nearly empty post kick-off as the National Anthem controversy rolls into week 7. The Cleveland Browns are playing at home against the Tennessee Titans. Plenty of seats went unfilled.

Granted, the Browns are horrible but that’s not the reason the seat was empty.  Historically, Cleveland has one of the strongest group of loyal fans in the NFL.  You haven’t been to a tailgate party till you’ve been in Cleveland on a game day Sunday.

The NFL likely hoped for a return to normalcy for Week 6, especially after Commissioner Goodell’s call to “move past the anthem controversy,” and address the issue in detail at league meetings on Tuesday. Instead, what the NFL got was a return to what has become the “new normal” in the age of anthem protests: empty seats.

Throughout the league, stadiums could be seen with thousands of empty seats at kickoff, and, in some cases in the middle of the game.

The New York Jets played New England on Sunday, meaning there should have been a big crowd for that game. There wasn’t. The Texans, Atlanta, and Baltimore are also very relevant teams with extremely loyal fan bases. Yet, thousands upon thousands of fans no-showed or didn’t buy tickets for those games.

Hopefully the NFL will soon learn its lesson before it’s too late!

Thank you Colts fans.Messages continue to be sent. It's not ALL about Trump as MSM want us to believe.It's about we the people flag respect. pic.twitter.com/w3PkKDBAs1

Be sure to check out these recent articles from Political Cowboy contributors: