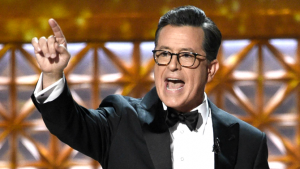 Americans continue to prove that they don’t care about political rallies disguised as awards shows in which self-aggrandizing Hollywood elitists give each other participation trophies.

According to statistics from Nielsen Media Research, the Emmys scored a crummy 8.2 overnight rating, which equals to about 11.2 million viewers. When compared to last year’s show it dropped over 2%. The target market for the show is young adults between 18 and 35. Their rating in that demographic was 2.8, which is an all-time low.

Disappointment has certainly set in at CBS. They were sure that Stephen Colbert was going to lead them to a resurgence in viewership. Since 2013 the Emmys have lost almost 50% of their viewers. They have the lowest number of viewers since the early 1990s.

Obviously, the Emmys have become nothing more than one of several prime time opportunities for Hollywood elitists to fete themselves, and last night was no exception. Although he started his monologue by claiming television was an “escape from reality,” nearly every award went to a show that marketed itself as a “timely” response to Trump’s America — making, of course, the Emmys a celebration of just how television isn’t much of an escape at all.

Most Americans simply aren’t interested in sitting through four hours of remarkably rich people who chastise themselves for their own lack of diversity, lecture Americans on having proper political opinions — or, for that matter, having the shockingly wealthy citizens of Hollywood, California, lecture Americans on how “real America” really is. They live it. They know.

But there was an interesting tinge to last night’s Emmy’s broadcast. Even as the host and guests derided the President, it appeared they were deliberately — and, perhaps, desperately — goading the President into tweeting about them, baiting Donald Trump for publicity. It makes sense: like Twitter, which would lose billions in value if the President were to shutter his account, Hollywood needs Trump to find it problematic in order to survive.

Fox and Friends asked me to join them on Monday morning following the Emmy’s and you can see my take here.