Emma Gonzalez Tries to Politicize Waffle House Shooting, Faceplants All Over the Facts 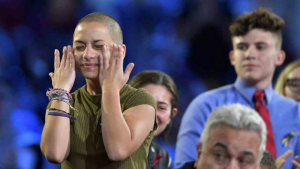 Imagine being seventeen and having the entire media establishment hang on your every word about one of the most hotly debated issues in the country regardless of the fact that you knew next-to-nothing about it.

I don’t think anyone would trust their seventeen-year-old self to make articulate, informed arguments, especially on Twitter and most especially when you have had your head inflated so big by an unheard of amount of media attention and the granting of undeserved moral authority that you probably don’t even remember your own name, let alone facts and figures that are pertinent to the argument at hand.

This is exactly what is happening to the famed Parkland kids, the anti-gun activists who survived the Parkland shooting become the media-appointed spokeschildren for progressive gun-grabbers determined to turn any tragedy into something that furthers their own agenda.

Gonzalez, on Sunday, upon receiving the news of the Waffle House shooting, took the opportunity to politicize someone else’s tragedy as well. Unfortunately, she was not armed (terrible pun intended…OK sorry) with any facts, logical arguments, or consistency. Even more unfortunately, she used this incredibly weak position to argue for the confiscation of your weapons.

Let’s break down her faceplant of a tweet storm:

(1/4) He was white and he used an AR-15. The @NRA is about to say this man had mental health issues, so that the rest of us will get scared of anyone with poor mental health and buy a gun in preemptive defense so that gun sales increase. Shootings don’t just happen in schools, https://t.co/FIzyTCvuA1

To begin with, it was clearly necessary to point out the shooter’s ethnicity. Ok…glad we cleared that up. Moving right along, the shooter she predicts the NRA will say had mental health issues, did, indeed, have severe mental health issues. But it wasn’t the NRA who said that, it was the police. Because the man was cray-cray. He thought Taylor Swift was stalking him. Need I say more?

Furthermore, she believes that citizens will be inspired by this event to buy a gun for preemptive self-defense. It’s almost as if…guns are effective tools for self-defense. Imagine that.

(2/4) they happen everywhere in America, and now one has happened in Waffle House. You can donate all the shooting shelters to schools that you want, but at the end of the day, we can’t build our world out of Kevlar – someone is making Mad Money off that.

Now shootings can happen in Waffle House. See, they couldn’t before, and now they can and…right, OK Emma. She really has a knack for profound observation, doesn’t she?

Anyway, she suggests that we “can’t build our world out of Kevlar”, but this is coming from someone who thinks that we can rely on the Federal government to just magically evaporate all the guns from America’s streets somehow with their magical legislation that will just magically remove all the hate from our hearts.

It’s pretty much downhill from here:

(3/4) The local police say a man at the scene wrestled his gun away – looks like you don’t need to arm a teacher (or a resource officer) to stop a shooting. There goes the sales pitch for @SmithWessonCorp 🤷‍♀️

This is where it gets really incoherent. So, because one incredible hero was presented with the perfect opportunity to tackle a crazed gunman, we don’t need guns?

The really sick thing is that in the case of the shooting that Emma Gonzalez herself survived, that supposedly endowed her with incredibly moral authority with which to educate the rest of us, multiple people, adults and children, lost their lives in the midst of heroic displays of bravery.

(4/4) Removing the assault and semi-automatic weapons from our Civilian society, instituting thorough background checks and mandatory waiting periods (and raising the buying age and banning the production of high-capacity magazines) are the ways to stop shootings in America.

Ah, there it is. So an unarmed hero is all we need to take down shooters, but we can trust the police, and the government, both of whom failed in Parkland and failed before the Waffle House shooting? Is she unaware that there are already background checks for literally all weapons sales? Is she unaware that many counties and states already have waiting periods with no discernible impact on crime? Does she even know how many lives are lost annually to weapons with high-capacity magazines vs. other magazine sizes? Does she have any data at all?

Or does she just blindly and obediently parrot the same bullcrap the mainstream media has been pushing on us for years?

For her grand finale of fallacies, she also added that “mass shootings occur in churches, in schools, at concerts, in waffle houses — just about anywhere. Except in other countries,” a fact Twitter quickly refuted:

This is a lie, the 6 deadliest shootings in history were outside the US: