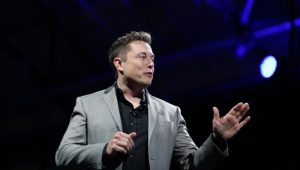 In a brand new interview with the Babylon Bee, which came out on Tuesday, billionaire Elon Musk managed to deliver some very compelling, thoughtful answers to some critical questions about issues we’re facing in our culture, all while still staying within the comedic spirit of the podcast.

Everything started off with a chat about some of the Bee’s classic headlines, with Musk firing off a quip saying it’s “actually true that Gavin Newsom is U-Haul salesman of the year.”

However, Musk soon went deep in thought, reflecting on what has happened over the course of the last few years in his home state of California.

“California used to be the land of opportunity. Now it has become sort of the land of over-regulation, over-litigation, and scorn,” he noted.

“From the collapse of California, the discussion turned to the collapse of mainstream comedy, which Musk ascribed to an unwillingness to punch left, no matter how warranted. That, he explained is how he became a Babylon Bee fan—because satire sites like The Onion began to focus more on upholding a liberal narrative than telling jokes,” the Daily Wire report about the podcast continued.

“It used to be much more even handed, the Onion,” Musk said. “And then they just got the woke mind virus.” He had much the same criticism of Saturday Night Live, a show he guest-hosted in May, to the consternation of several cast members who publicly objected to his appearance.

“Many if not most of the SNL episodes have become a kind of a moral lecture of why we’re bad human beings instead of comedy,” the billionaire said, adding, “They’ll beat up on Ted Cruz 17,000 and you’re like, okay we get it.” The issue, Musk believes, is one concerning authenticity. “Is the comedy getting at an essential truth or is there a propaganda element?” he went on to ask rhetorically, making the suggestion that most mainstream comedy coming out in this day and age is dedicated to the latter. “When it stops trying to get to an essential truth that is humorous, you know, it’s just not that funny.”

As to why the Onion and SNL have become so left when they did not start out that way? Musk pointed to what he called “arguably one of the biggest threats to modern civilization.” That is, wokeness.

“Wokeness basically wants to make comedy illegal,” he explained, “Trying to shut down Chappelle, come on man, that’s crazy. Do we want a humorless society that is simply rife with condemnation and hate basically? At it’s heart wokeness is divisive exclusionary and hateful it basically gives mean people a shield to be mean and cruel, armored in false virtue.”

For all the jokes that the Babylon Bee injected into the conversation, the funnymen asked some pointed, journalistic questions that few mainstream reporters have ever explored with Musk about his wealth, leading to a surprising financial education for viewers. Democrats like Senator Elizabeth Warren (D-MA) have increasingly targeted Musk, accusing him of being a “freeloader” and benefiting from a “rigged tax code.” Musk set the record straight with a quick tutorial on the free market.

“If Tesla and Space X went bankrupt, I would go bankrupt too. Immediately,” the world’s richest man went on to explain. “I built these two companies and it was extremely difficult to build them…Rewarding too, but massively painful and difficult.” He then revealed that he never sold the stock that made him worth $200 billion because he believes a CEO has a moral imperative to have skin in the game with his investors.”

“My impression was that you shouldn’t take money off the table…and de-risk things, that the captain should go down with the ship,” he then stated.

“If he had and the companies failed, he explained, he’d have been enriched while investors suffered,” the report said.

“That does not seem right. That’s the reason I didn’t sell. Even when bankruptcy was literally weeks away, I did not sell stock,” Musk remarked. “And then the companies became valuable.”

“For the many millions of Americans who haven’t had an adequate course in financial literacy, Musk clarified how his net worth is calculated and why the market has decided his companies’ value,” the report continued.

“Tesla and Space X’s value is not up to me. It’s up to investors. And they decided Tesla was worth a trillion dollars. And I own 20 percent of the company,” the billionaire said.

“People don’t understand that this is not some function of hoarding. It’s simply that I own 20 percent of company that suddenly became very valuable as decided by external investors. And so 20 percent of a trillion dollar valuation is 200 billion dollars. I’ve said at times that I think the stock price is too high and the investors just ignore that. They just kept making the price higher,” he continued.

“My so-called wealth is not some deep mystery. It’s simply, what is my ownership percentage of Space X and Tesla? Multiply that by the valuation, and that’s my net worth. It’s super simple. And my taxes are super simple. I have no off-shore accounts, no clever tax evasion or anything like that. I don’t draw a cash salary or any bonus from the companies at all,” he added.

It seems a lot of very important people in the world are beginning to wake up big time to the problems with wokeness and cancel culture, which is the first hardcore evidence to suggest that our society might just be at the start of the swing back to the right that seems inevitable.

Let’s hope that is indeed the case.