Ellen Interviewed Kevin Hart, Now Liberals Are Mad At Her 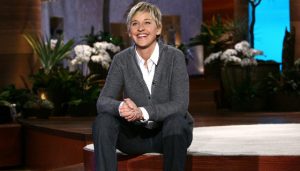 Ellen DeGeneres is one of the most famous members of the Hollywood LGBT community, so you’d think when she gave comedian Kevin Hart a fair shake in a recent interview, folks would pay attention and have an open mind to what she had to say.

Apparently that seems to much to ask for a generation that lives to find something to be offended about on a daily basis. Some folks just can’t breathe without having an issue to blabber on about on social media.

In clips from an interview that airs in full Friday, DeGeneres gives Hart a chance to again apologize for tweets and jokes dating back to 2009 that were the source of a firestorm over the announcement that he would be the next host of the Oscars. She also says that she contacted the Academy and asked them how they’d feel about Hart reversing his decision to step down.

“I had an incredible and honest conversation with [Kevin Hart] about hosting the #Oscars. It was supposed to air on Monday. I don’t want you to have to wait, so now it’s gonna air tomorrow,” Ellen announced in a series of tweets Thursday. “I believe in forgiveness. I believe in second chances. And I believe in [Kevin Hart],” she added along with a 6-minute clip of her sit-down with Hart Thursday. “In this conversation, [Kevin Hart] was authentic and real, and I’m in his corner.”

I had an incredible and honest conversation with @KevinHart4real about hosting the #Oscars. It was supposed to air on Monday. I don’t want you to have to wait, so now it’s gonna air tomorrow.

In this conversation, @KevinHart4real was authentic and real, and I’m in his corner. #OscarsNeedHart https://t.co/nhMwSefrMl

Describing hosting the Oscars as one of the biggest goals of his life, Hart tells Ellen in the clip that after just a day of celebration over being selected, he was “hit with an onslaught on social media of my past coming back up again.”

Ellen agreed, and Hart continued: “Another day goes by … this fire’s angry, it’s all over the place,” he said. “Now the headlines are starting to change. The headlines are ‘Kevin Hart Refuses To Apologize For Homophobic Tweets From The Past.’ The word ‘again’ was left out. Everybody took those headlines and started to run with it. So now the slander on my name is all ‘homophobia.’ Now I’m a little upset. I’m a little upset because I know who I am. I know I don’t have a homophobic bone in my body. I know that I’ve addressed it. I know that I’ve apologized. I know that, within my apologies, I’ve taken ten years to put my apology to work. I’ve yet to go back to that version of the immature comedian that I once was. I’ve moved on. … I look at life through a different lens, and because of that I live it a different way.”

And now for the lovely reactions. What a wonderful group of individuals we have here, folks:

Hi Ellen. I think you’re a cool lady. Have for a while now. But this? This ain’t it. Kevin’s attacks were geared towards Black gay men. That being said, you have no authority to forgive him on behalf of a section of the community you don’t belong to.

I also believe in forgiveness. But I also believe that forgiveness requires an actual apology. Not “I’m sorry people are so sensitive.” Just “I am sorry.” All he had to do. And he indignantly refused because he felt his moment was being tainted. That he was the aggrieved.

Because he "apologized" in the past, everyone was supposed to know about that? Most people didn't know who he was until it was announced he was hosting Oscars. All he had to do was apologize (even if was a "repeat" apology, it would be new info for most of us). But, he refused.

Ellen’s show is basically the embodiment of respectability politics, so using it as a platform to absolve Kevin Hart on our behalf sounds pretty much on brand. Her sitcom allowed her to do something radical, which she suffered for, & she’s been running away from that ever since.

This just goes to show you that the LGBT community does not believe in forgiveness, nor is there anything you can do to make up for whatever perceived slight they try to nail you for.

There’s no appeasing the perpetually offended. None. So the question now should be, why bother? Given the actual percentage of the population this group of individuals represents — which is actually quite low — why do we feel the need to constantly try to appease them?

It’s a waste of time. Comedians need to just do their own thing and not worry so much about the consequences of who they might offend. Or just make sure their material offends everyone in equal measure.