Elizabeth Warren Wants to Change the Name of This Holiday. Can You Guess Which? 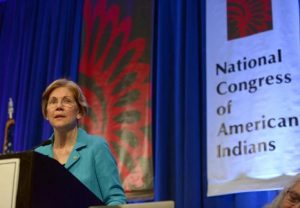 So far, Elizabeth Warren’s exploration into a run for president has been super duper awkward.

While few things are going to be able to erase the painful awkwardness of her forced “casual” Instagram video where she drank a beer and used mechanical phrases that a focus group likely picked out for her to try to reach the youths, she seems unable to get away from the whole fake Indian thing too.

Now, she’s openly advocating for a major U.S. holiday to get a brand-spankin’ new politically correct name and, you guessed it, it’s Columbus Day which, like she and many other virtue signaling white people, think should be renamed Indigenous People’s Day to just go ahead and erase all the bad things that have ever happened to Native Americans in a single move.

2020 WATCH: Asked by @ConMonitorNews if she supports a NH House bill to rename Columbus Day as indigenous people day, @SenWarren says "why would we not want to honor indigenous people… I’m in favor of honoring. I think that’s a good thing for us to do" #nhpolitics #FITN #mapoli pic.twitter.com/OBiAESFb5F

“My feeling on this is why would we not want to honor indigenous people?” she said of a New Hampshire bill to rename the holiday. “These were the people who were here. These were the people who in Massachusetts reached out and helped the first settlers, and helped them survive those first harsh and rugged years. I’m in favor of honoring, I think that’s a good thing to do.”

“I think we could also do this at a very personal level,” she said. “I think we ought to honor those who were here first and the extraordinary sacrifices they were forced to make.”

Well, we all know she’s changed her white heritage to Native American on a personal level, so is that what she means?