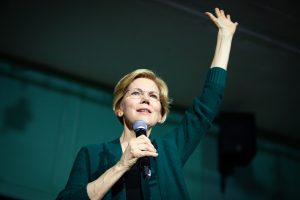 Perhaps one of the greatest dangers the leftist Dem platform poses to the American people is its stance on education.

Despite the clear benefits of allowing education to run more like the free market, with factors like competition and freedom of transaction driving up quality and driving down cost, the Dems would rather keep slapping duct tape on our hulking, inefficient school system while it continues to crank out dumber and dumber graduates (despite imposing near military-strict academic standards on younger and younger children.)

Democratic Massachusetts Sen. Elizabeth Warren is pledging to take up the mantle against a common-sense education system by vowing to crack down on school choice if elected president.

Here’s the kicker, though.

Out of one side of her mouth, Warren is determined to force American families into a narrow funnel of education options for their children, especially lower-income families. But, as public records indicate, she chose to send her son Alexander to Kirby Hall, an elite private school near Austin, Texas, where tuition for kindergarten through middle school is $14,995 per year and a year of high school tuition is $17,875.

“I do not blame Alex one bit for attending a private school in 5th grade. Good for him,” said Reason Foundation director of school choice Corey DeAngelis, who first broke the news of Warren’s education hypocrisy on Monday. “This is about Warren exercising school choice for her own kids while fighting hard to prevent other families from having that option.”

The Daily Caller also reports that it is still unclear whether or not Warren sent any of her children to private schools during any years other than 1987, but that’s immaterial to the point. The point is that she had the choice (and the financial wherewithal, I might add) to send her child to a school for whatever reason she deemed necessary.

Every American should have that choice, not just elites like Warren who can afford posh private schools.

Ironically enough, Warren praised charter schools as recently as 2016 when she declared that they “are producing extraordinary results for our students” in Massachusetts. Of course, her planned crackdown on charter schools would leave swanky private schools like Kirby Hall unaffected but would virtually eliminate decent charter schools as a parallel option for less affluent families.

“The losers in these political calculations are the children whom charters help,” the Washington Post’s editorial stated in a critique of Warren’s blatant pandering to teacher unions. “Charters at their best offer options to parents whose children would have been consigned to failing traditional schools. They spur reform in public school systems in such places as the District and Chicago. And high-quality charters lift the achievement of students of color, children from low-income families and English language learners.”

What a woman of the people.