Elizabeth Warren: Medicare For All Could Cost 2 Million Jobs, But They Can Just Sell Auto Insurance 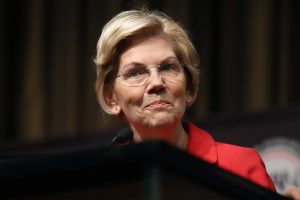 As Joe Biden continues to sink, Sen. Elizabeth Warren inches closer to securing the 2020 Dem nomination for the presidency.

With the confidence that comes with being the party’s top pick for the Big Show apparently comes Warren’s honesty in declaring some of the more troubling aspects of her major campaign platforms. Warren’s take on the “Medicare For All” scam received a fair bit of attention over the weekend after the Massachusetts senator channeled her inner Marie Antoinette when asked what would happen to the roughly two million Americans currently working for private insurance companies.

Q: Where do those who work in health insurance go when private insurance is eliminated?

Sen. Warren: "No one gets left behind. Some of the people currently working in health insurance will work in other parts of insurance. In life insurance, in auto insurance, in car insurance." pic.twitter.com/5jztvYbqnb

“Some of the people currently working in health insurance will work in other parts of insurance — in life insurance, in auto insurance, in car insurance, some will work for Medicaid,” Warren said, according to Fox News, claiming to have five years of “transition support” worked into her plan for those whose jobs she’d eliminate.

“Because what this is about is how we strengthen America’s middle class, and how we make sure that in transitions no one gets left behind,” she continued. “It’s right there in the plan, and it’s fully paid for.”

Paid for by increased taxes on so-called “ultra-millionaires,” who, of course, have the wealth and mobility to simply escape socialist extortion and flee to tax haven countries.

“Regardless of what kind of money is involved, ‘Medicare for all’ would likely result in a pretty significant kind of shift in how our health care system is structured, and even supporters of that approach within the health policy world have said that would likely mean lost jobs in some form,” said New Hampshire Public Radio reporter Casey McDermott in an interview with Warren before the “Medicare for all” plan was released. “An economist at the University of Massachusetts, Amherst, told Kaiser Health News earlier this year that that could result in about two million jobs lost.”

“So I agree,” Warren responded. “I think this is part of the cost issue and should be part of a cost plan.”

Elizabeth Warren admits 2 MILLION Americans could lose their jobs under her “Medicare for All” plan.

“It’s really cute how Warren and her eager beaver ‘progressive’ campaign staff, none of whom have ever run a business, think they’re smart enough to remake the entire economy without causing any problems,” Mike Huckabee said of the disastrous plan over the weekend.

“Warren concedes another study that estimates her plan would kill 2 million jobs, but calls that ‘part of the cost issue,’” Huckabee added. “If you’re one of those 2 million newly unemployed, the elimination of your job isn’t a cost issue, it’s a catastrophe.”

Meanwhile, Joe Biden’s campaign argued that Warren’s “unrealistic plan” means she would “even further increase taxes on the middle class or break her commitment to these promised benefits.”

“The mathematical gymnastics in this plan are all geared toward hiding a simple truth from voters: It’s impossible to pay for Medicare for All without middle-class tax increases,” Biden deputy campaign manager Kate Bedingfield said.

Here’s hoping the American electorate realizes that socialized healthcare is hot garbage before 2020 rolls around.