Elizabeth Warren is So Sad About Unpaid Government Workers, She Donated Her Salary. To Foreigners. 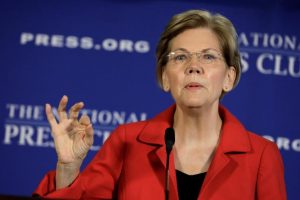 Oh, the never-ending amusement that is the left’s virtue signaling.

Elizabeth Warren, who is super duper sad, like the rest of the Democrats, about the poor government workers who have to suffer furloughed salaries until the orange man is vanquished, didn’t have it in her to take her Congressional salary.

Warren, who became the first of the Democrats to announce presidential aspirations for 2020, has been getting herself as much attention as possible, so throwing herself on her sword and donating her salary to a good cause was a smart choice.

How, in good conscious, could the good Senator possibly accept her $174,000 when National Parks and HUD employees wonder how they will feed their families?

So she made the bold move of donating her salary.

Over 7,000 people in Massachusetts have been sent home or are working without pay during the #TrumpShutdown. Until @realDonaldTrump re-opens the government, I'm donating my salary to @HIASrefugees, a nonprofit that helps refugees and makes our country stronger in the process.

HIAS Refugees is a Jewish non-profit that lends aid to refugees from war-torn nations as well as victims of human and sex trafficking, which is certainly a noble cause.

I’m sure HIAS could use the help, but let’s just remember that the refugees they help aren’t the ones that Trump wants to keep out with the big, beautiful wall.