Elderly Woman Accosted By Antifa Has A Simple, Powerful Message For Her Attackers 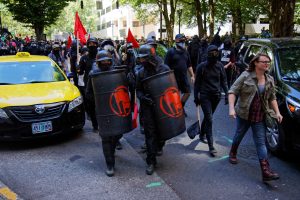 Antifa hate group rioters were at the center of yet another controversy over the weekend, this time for blocking an elderly couple from attending a conservative political event at Mohawk College in Ontario, Canada.

At the time, The Daily Wire reported:

In the video, which sparked massive outrage online, an elderly woman with a rolling walker can be seen trying to cross a street alongside her husband as a horde of Antifa thugs repeatedly shout, “Nazi scum off our streets.” At one point, when the husband tries to reason with a female member of Antifa, she immediately shouts back, “Don’t you f***ing touch me.”

The incident unfolded outside Mohawk College in Hamilton, Ontario on Sunday, which was hosting an event featuring commentator Dave Rubin and founder of the right-leaning People’s Party of Canada, MP Maxime Bernier.

In a video shared by journalist Andy Ngo, the unnamed woman accosted alongside her male acquaintance reportedly offered a simple, yet powerful message to the world, and to Antifa thugs: “Free speech is the cornerstone of our democracy, and can never, and will never be denied.”

The elderly woman with a walker who was accosted by antifa militants in Hamilton, Canada has spoken out in a new clip: pic.twitter.com/CTYcvLzCgC

Ngo, whose reports make up the bulk of virtually any media coverage of Antifa attacks, also reported on Wednesday that one of the men who harassed the woman has been identified as Alaa Soufi DaLua, a Syrian immigrant.

Intelligence group @EXEINTEL reports that one of the masked antifa militants who harassed the elderly woman with the walker is Alaa Soufi DaLua. I can confirm that I independently verified this as well. DeLua is a Syrian man who settled in Canada. pic.twitter.com/aMgBF7yFYw

Ngo himself was infamously attacked by Antifa terrorists in Portland, Oregon. The journalist suffered a brain hemorrhage after the extreme leftists kicked, punched, and had “milkshaked” the man back in June. According to Portland Police, some of the milkshakes being tossed by Antifa may have contained quick-dry cement, but we’ll never know for sure because they are a bunch of absolute morons who haven’t so much as lifted a finger to investigate the incident, let alone arrest anybody.

At the event in Canada, four people were ultimately arrested later on in the evening for breach of the peace after a fight broke out near the entrance of the hall at Mohawk College where the elderly pair were on their way to attend an event featuring Maxime Bernier, leader of the People’s Party of Canada, and American political commentator Dave Rubin.