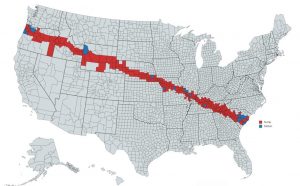 100percentfedup.com reports that lefty Boston Globe is using the 2017 Solar Eclipse to make a case for a Clinton presidential win. The over-the-top article goes out of its way to make the claim that Trump lost to Clinton…It’s delusional and twisted that the Globe would use an article about the eclipse to continue down this path of delusion…

The Globe asked: : Is the eclipse throwing shade at Clinton supporters?

The path of ideal viewing spots for this month’s highly-anticipated total solar eclipse cuts overwhelmingly through places that voted for President Trump in November. 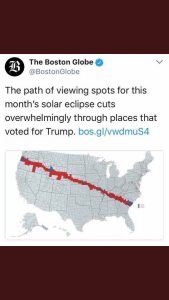 IT STARTS OUT NICE ENOUGH TO TRUMP BUT THEN IT’S… WHAM! THEY PIVOT TO MAKE THE CASE FOR HOW THEY SILL BELIEVE CLINTON WON IN 2016!

And about 92 percent of those counties swung in Trump’s favor, while fewer than two dozen counties voted for his opponent, Hillary Clinton.

That stands in stark contrast to the overall results of the 2016 election, in which about 51 percent of votes cast for either candidate went to Clinton, while about 49 percent went to Trump.

The eclipse on Aug. 21 will be visible to people across the United States, but in most areas, the view will be of a partial eclipse. People will only be able to see a total eclipse if they’re located along the “path of totality,” which will start near Lincoln City, Ore., and end near Charleston, S.C.

Still, it’s not entirely surprising that the eclipse’s path of best perspective could slice through the entire country while mostly avoiding areas that backed Clinton.

WHAM! THE CASE IS MADE FOR WHY THEY STILL BELIEVE CLINTON WON!

While she won the popular vote, Trump won the Electoral College and about 84 percent of the country’s 3,100-plus counties.

FUN FACT OF THE DAY…

Perhaps it’s not a surprise that the solar eclipse is passing over Trump strongholds given that the president himself was born during a lunar eclipse.

On June 14, 1946, the day Trump was born, there was a total lunar eclipse, though it wasn’t visible from the United States, NASA records show. Instead, it could be seen from parts of South America, Europe, Africa, Asia, and Australia.

THE LIBERAL MEDIA IS STILL FIGHTING THE FIGHT…WE CAN’T WAIT UNTIL TRUMP2020!

WE JUST WANT TO SET THE RECORD STRAIGHT: