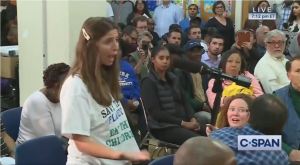 So, a woman at a townhall in Rep. Alexandria Ocasio-Cortez’ congressional district issued a call to start “eating babies” because “bombing Russia” won’t solve overpopulation before climate change kills us all in “a few months.”

Either that woman needs her meds adjusted or she needs the damn Nobel Prize for such skillfull trolling. Either way, she did a masterful job, intentionally or not, of showcasing the abject mania of the climate alarmists on the left.

“We’re not going to be here for much longer, because of the climate crisis,” the woman pleaded with AOC. “We only have a few months left. I love that you support the Green Deal, but it’s not gonna get rid of fossil fuel. It’s not going to solve the problem fast enough. A Swedish professor said we can eat dead people, but it’s not fast enough! So, I think your next campaign slogan needs to be this: We’ve got to start eating babies.”

One of Ocasio-Cortez's constituents loses her mind over climate change during AOC's townhall, claims we only have a few months left: "We got to start eating babies! We don't have enough time! … We have to get rid of the babies! … We need to eat the babies!" pic.twitter.com/uVmOnboluI

The woman went on to take off her jacket to reveal her t-shirt, which read, “Save the planet Eat the Children.”

“We don’t have a enough time. There’s too much Co2. All of you!” she went on, turning to those around her, “You’re a pollutant! Too much Co2. We have to start now. Please — you are so great. I’m so happy that you are supporting a Green New Deal, but it’s not enough. Even if we were to bomb Russia, it’s not enough. There’s too many people, too much pollution. So, we have to get rid of the babies. That’s a big problem. Just stopping having babies just isn’t enough. We need to eat the babies. This is very serious. Please give a response.”

AOC, making good use of that annoying kindergarten teacher voice, thanked the woman for her contribution to the discussion and assured her that we have “more than a few months,” to which the woman responded, “No we don’t!”

AOC went on to state that we must become “net zero” within a few years before moving on to other questions. Of course, she didn’t say a damn thing about the call for cannibalism, but she did demand that everyone stop talking about the woman in a tweet later that night:

We had a fabulous town hall tonight & I’ll be highlighting some moments from it.

At one point I was concerned there was a woman in crisis & want to ensure we treat the situation compassionately.

Let’s not mock or make a spectacle. &let’s work on Medicare for All!

Mmm, yeah, sorry, no can do. It’s spectacle time.

The fact that we don’t know if that woman was serious or not shows how insane the left has gotten. Save the planet! Eat the babies! https://t.co/FctBTfC86Z

If she’s got mental problems they are exacerbated by the scare mongering you are a part of re the climate. If you want to be compassionate tell the truth.

Maybe you should stop scaring people especially the feeble minded into thinking we only have 12 years left to live… Take some damn responsibility!

When you tell people they're all literally going to die if we don't do something within 12 years to save the planet, you inspire this kind of derangement. Grow up and stop blaming everyone else for everything that's wrong and own the big part you're playing in this madness. https://t.co/hliciLMFpL

I’m gonna go ahead and say it: a party that rejoices in abortion “rights” has no business being disgusted by a plot to “eat the babies,” let alone to suggest that the woman calling for it is insane. This guy nails it:

No one should be mocking her. She is a bright young woman with forward-thinking ideas. Thank you for giving our young people a voice!

And, I remind you, AOC still has yet to actually say anything about the woman’s statements, opting instead to sweetly call her a loon and blame it all on the GOP:

It’s some kind of socialist superpower.

Will “eating the babies” be incorporated into the Soylent Green New Deal?

While one can only hope that this woman is simply a very dedicated troll, we know that there is some next-level darkness at work in the world. If this woman were serious, it makes perfect sense that she’d be a fan of AOC. This is the leftist dystopian future that awaits us, folks.