Easy, There…Unhinged John Cusak Calls for An Uprising Against Trump 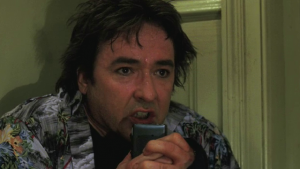 John Cusak, who has apparently learned nothing from the ineffectiveness of unhinged leftist celebrities to inspire policy change or even host a productive national conversation about our country’s most pressing issues, went on a rant of treasonous proportions Tuesday night, calling for violence in the streets and an uprising against the President.

He railed against POTUS for “putting children in cages”, which is kind of embarrassing for the High Fidelity star (at least, that’s the last movie I can think of that he was in) since the picture that went viral on Twitter a few weeks ago of “children in cages” was actually taken during the Obama administration.

Cusack kicked off his anti-Trump tirade by writing, “Let’s go to streets. Who owns the streets? Civil disobedience. Require the government to leave if you are not satisfied with it. We need to kick Trump out of the office now. He’s ill, deranged and dangerous. He’s putting children in cages — f*** the Nazi s- shut them down.”

Cusack added, “There has always been two tracts the political and legal – mueller on it – Political track – gotta vote out the death kult and every single enabler,” he added. “And We gotta shut down trump – scare the s*** out of them – get children out of cages.”

“U N Trump is violating human rights – with this fiasco of our souther border – viciously taking children away from their parents for seeking asylum,” he continued, becoming more unhinged with unfounded accusations as he went.

Careful there, John, free speech is a beautiful thing, but you’re getting close to speech that is actually illegal.

The Supreme Court decided in Brandenburg v. Ohio that speech “directed to inciting or producing imminent lawless action and is likely to incite or produce such action” is not protected speech.