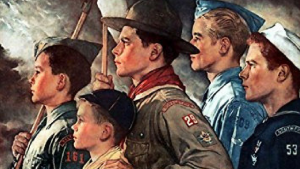 Scott Morefield, columnist for Town Hall and an Eagle Scout, has fond memories of his experience in the Scouts as a boy.

Beginning with his first experience chopping wood at age eleven, the next seven years would “filled with lots of ‘boy-stuff,'” he explains, “under the watchful supervision of caring men and the camaraderie of other boys. Canoeing alone on a lake. Building campfires. Barely passing the ridiculously hard swim test at summer camp so I wouldn’t be the only kid not allowed on the water. S’mores. Dump cake. Hobo packets. Campfire stories. Games, teasing, and general rowdiness.

“Sleeping alone in the middle of the woods as a part of the Order of the Arrow Ordeal. Peeling myself out of a semi-warm sleeping bag on a freezing February morning in 1986 to watch Haley’s Comet pay a rare visit to Earth’s orbit. Picking up and sorting food for the hungry as a part of our annual food drive. Lugging a wooden sled across town to compete with other troops in Scouting skills contests, all of which involved plenty of cool “boy-stuff” like tying knots and building things.”

He explains that the original intent of the Boy Scouts, founded in 1910 in the US after Sir Robert Baden-Powell began the movement in England two years before, was to nurture and educate young men on how to be, well, good Christian men.

“We aim for the practice of Christianity in their everyday life and dealings, and not merely the profession of its theology on Sundays,” Baden-Powell wrote in Scouting For Boys, Morefield notes.

Of course, this original intent has been flipped on it’s head, the culmination of its slippery slope the organization has been traversing being their decision to take “boy” out of the name last week.

“Of course, as we all know,” Scott Morefield explains, “once social justice warriors gets their slimy tentacles into something their thirst is never quenched until that something is entirely destroyed, and such has it been with Boy Scouting ever since its clueless national leaders began leading the organization down that perilous cliff. From openly gay scout leaders to transgender members to just last Wednesday, when the organization officially announced a name change to Scouts BSA because, well, Boy Scouting isn’t just for boys anymore.”

While there is certainly no reason that boys and girls can’t share scouting activities in general, the sanctity of gender-specific scouting can only lead to the full demise of the American scouting traditon, he says.

“Obviously, girls can canoe, camp out, and do pretty much anything a boy can, if she wants. But whether it’s a sports team or Boy or Girl Scouting, groups formed based on gender can provide a healthy, nurturing place for kids to come of age, not suppressing their God-given instincts and preferences but rather celebrating them and learning how to express themselves and function socially within the training wheels of those of their own gender,” he says.

And that’s just it, really. Originally founded to raise up young Christian boys and girls to fulfill their roles as God intended, following in the tradition of biblical morality that our nation was founded on, political correctness has spread like a cancer through the Boy Scouts and will most likely destroy everything it was meant to do for young boys–because you simply can’t balance this special brand of “inclusivity” and the very real and important purpose the Boy Scouts have been serving in the lives of young men.

“Because try as liberals might to erase it, gender is and will always be ‘a thing,'” Morefield rightly asserts.

“I am grateful for Scouting and what it meant to me growing up,” Morefield says in conclusion. “But I am also angry at what liberals have turned the group into, as well as the fact that, a decade from now, it very likely won’t exist. Because tragically, the Boy Scouts’ stubborn march to ‘inclusivity’ at any cost has managed to gut the organization of what made it special in the first place, which inevitably reminded me of this key quote from the movie The Incredibles – ‘If everyone is special, no one is.'”