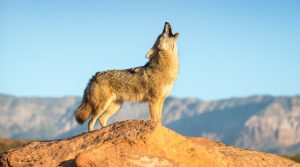 So during Thursday evening’s debate, President Donald Trump made a reference to “coyotes” smuggling families across the border into the United States during the portion of the debate geared toward the issue of immigration.

“Children are brought here by coyotes and lots of bad people, cartels, and they’re brought here, and they used to use them to get into our country,” the president said. “We now have as strong a border as we ever had. We have over 400 miles of brand new wall, you see the numbers. And we have to let people in, but they have to come in legally.”

Pressed repeatedly on how the U.S. will locate the parents of more than 500 children who were separated from their families, President Trump touts “stronger borders” and the wall, then claims he’s “trying very hard” to reunite them. https://t.co/HR9MFfjFDv #Debates2020 pic.twitter.com/KKYsJ4dFWR

“These 500 and plus kids came with parents … coyotes didn’t bring them over,” Joe Biden says, responding to President Trump. “It makes us a laughing stock and violates every notion of who we are as a nation.” https://t.co/HR9MFfjFDv #Debates2020 pic.twitter.com/q3eC25URJB

After Trump made this particular statement, folks on Twitter began to reveal just how low their intelligence levels really are by revealing they thought he meant actual coyotes. You know, like the animal. Or the hilarious cartoon character from Looney Tunes.

“Since when did coyotes start bringing kids over here?” Karlous posted.

Since when did coyotes start bringing kids over here?

It just gets worse from here:

The children are brought here by coyotes?

What does "children are brought here by coyotes" mean?! #Debates2020

I thought i was tripping when i heard that.

Hot damn, coyotes are so much smarter and capable than I ever gave them credit for. I apologize for underestimating you.

Did @realDonaldTrump just say 545 kids they can't find their parents for came over through "cartels and coyotes"?! How the hell does a coyote bring a whole human across the border?! Lord—–stop talking. #FinalDebate

Kids came over on coyotes to America!?! Am I missing something?

As you can see, the stupidity of these individuals knows no bounds. Like zero. Just when you think folks can’t get any dumber, along comes blue checks on Twitter saying “hold my beer.”

Folks, these people are all old enough to vote. Lord help us.