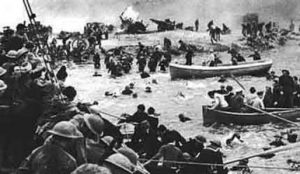 Seventy-seven years ago, the German blitzkrieg came to France. The Wehrmacht reached the English Channel in just ten days. Nearly 400,000 British, French, Belgian, Polish, and Dutch troops found themselves stranded, trapped between the Germans and the sea.

Unexpectedly, German leadership decided to halt their advance for three days, possibly to consolidate their lines and prevent an Allied breakout. The British took advantage of the break to evacuate their soldiers.

The trapped men had no idea what would happen. Most simply waited, assuming they would be killed or captured. British commanders wanted to save their naval and air forces to defend their island against an expected invasion, so it appeared the men were on their own. A plan was put into place, however, and orders were given to protect the beachhead. French forces fought fiercely, along with some British units, holding the Germans at bay for ten days while the evacuation took place. As many as 40,000 of those French troops couldn’t be evacuated and were forced to surrender.

One of the challenges the Allies faced in getting their men home was destruction of Dunkirk’s piers and docks. Only a single seawall, called a mole, was available for the large ships to take on soldiers. To deal with the problem, the Royal Navy requisitioned small, private pleasure craft. They were able to move in close to the shore and ferry survivors out to the bigger ships. Over the ten-day period, these tiny boats and their civilian crews carried more than 330,000 men to safety.

Whether because many saw the battle as a humiliating defeat or because of other reasons, the story remained largely untold. Until Christopher Noland released his movie, “Dunkirk”, last week, the full resources of Hollywood had never been used to memorialize the people who endured so much before the United States entered World War II. The film has gotten excellent reviews, with some critics calling it one of the best movies ever made about war. While so many historical accounts are criticized for distorting facts to serve the storyline, “Dunkirk” has been hailed as accurate in its portrayal of both the specific battle and war itself. Predictably, some on the left see that as a problem.

Brian Truitt, in his review for “USA Today”, gave the movie three-and-a-half stars out of four. He praised the casting, acting, musical score, and directing. He said the cinematography contained, “…exquisite beauty but also utter desolation…” In the review, Truitt praised Nolan for his exploration of the heroism shown by those who carried the day. Then, in closing, he remarked, “…the fact that there are only a couple of women and no lead actors of color may rub some the wrong way.” Why is that even a concern? Why is it worthy to be mentioned in a newspaper with national circulation?

Twitter lit up when the movie premiered last Friday, and like the USA Today review, most of the comments praised Christopher Nolan’s achievement. Brian Truitt’s prediction, however, quickly proved true. Those on the left wasted no time decrying another Hollywood war movie dominated by white European men. It’s mind-boggling to think these people can dismiss the sacrifice and suffering so vividly portrayed because they don’t like the actors’ skin color.

Those men fought to keep their countrymen free. They endured horrors most of us can’t imagine. They watched as their buddies were shot, drowned, and blown to pieces. Their blood stained the sand and even the surf red. They sacrificed all for King and country and all that stands for. Eighteen months later, they were joined by their American allies.

Our parents, grandparents, great- and great-great-grandparents walked through hell to maintain the ability of Americans of all generations to enjoy life and liberty as we pursue happiness. They didn’t hide in safe spaces. They didn’t apologize for those who tried to destroy our nation. They didn’t try to reason with enemies who swore to subdue us. They did whatever was necessary, even died, to protect the freedom of all Americans – even the ones they disagreed with.

Today, half the people of our nation run for cover when they encounter an idea they don’t like. They wail and gnash their teeth, go to court, destroy neighborhoods, and reschedule exams when something traumatic – like a member of the white patriarchy challenging their beliefs – happens.

But, words hurt, and the sacrifices made seventy years ago notwithstanding, today’s social justice warriors have taken up the cause of de-weaponizing the very language and thought our ancestors fought to protect. I guess every generation has their own struggles.