Dunkin Donuts Employee Is Mugged…Then Arrested. You Won’t Believe Why. 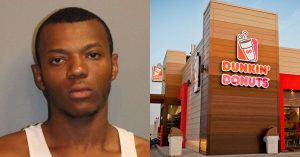 Something has gone seriously wrong in our country if you can be arrested for defending yourself, and yet these cases are becoming more and more common.

A 21-year-old Connecticut Dunkin Donuts employee, Jeffrey Sumpter, was recently sentenced to 18 months in jail for stabbing another young man in the leg.

A young man who was one of several assaulting Sumpter.

The most insane thing is that the judge said he believed Sumpter, but in Connecticut, you apparently can only defend yourself by trying to flee when being attacked.

A Bridgeport man who was assaulted by three juveniles while he was at work in Norwalk will have to spend 18 months in jail for stabbing one of the attackers.

“I was defending myself,” Jeffrey Sumpter, 21, told Judge John Blawie on Monday morning at the Stamford courthouse when he was sentenced for stabbing one of the males in the leg last October.

Blawie told Sumpter that he understood and believed his version of events, but he said he had to follow the letter of the law.

Sumpter, dressed in a white prison jumpsuit with short sleeves, did not reply. His public defender Howard Ehring said unlike a state like Florida, which has a law allowing its residents to stand their ground, Connecticut law requires Sumpter to retreat from the beating he was given at the Dunkin’ Donuts where he worked.

So the fact that this young man was sentenced to jail for defending himself isn’t even the craziest part of this story.

It’s that anyone in CT could be sentenced for doing the same thing.

Can you imagine if he’d been a CCHL holder?!