Dr. Jha Speaks Out About Shutting Down Schools Over Omicron 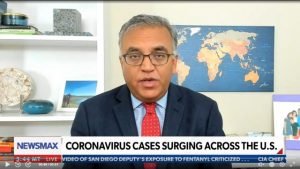 According to Dr. Ashish Jha, who serves as the dean of the Brown University School of Public Health, stated on Tuesday that time and money have been invested in helping to get kids across the United States back to school, therefore, it’s “irresponsible” to make kids turn back to remote learning, even as the omicron variant continues to surge.

“I have noticed that everyone understands the personal value of in-person education,” Jha went on to say during an appearance on Newsmax’s “Wake Up America.” “It was one thing in the first couple of months of the pandemic, in March, April, or May of 2020, but by the fall of 2020, it was pretty clear kids could come back to school safely.”

The remarks from Jha come after he posted a tweet on Monday questioning why schools are shutting down again, pointing out that “with mitigation, we’ve seen very little in-school transmission.”

“My kids were going back to school yesterday, but also I was starting to see a lot of talk about shutting schools down again,” Jha stated during his interview on Newsmax. “I think at this moment, shutting schools down is irresponsible … schools can do this, and if they haven’t done anything, if they haven’t made any efforts to improve ventilation, that should not be on the kids.”

Meanwhile, it is time for a change in the way that COVID-19 testing is done, Jha said, but he disagreed with comments from Florida Surgeon General Joseph Ladapo, who said the state is calling for more “value” to be put on tests from older or vulnerable people than on those coming from younger people or the asymptomatic, according to local news reports from CBS-12.

“Let’s talk about that 8-year-old that is getting tested,” Jha commented. “You say, Well, why do I care? We’re not going to do anything differently. Except, that 8-year-old may go visit Grandma this weekend.”

Further, health experts want to track what’s happening with infections, and the response to a positive test is important, said Jha.

“We don’t want to freak out over the 8-year-old testing positive, but maybe if they’re positive, don’t go visit Grandma this weekend,” stated  the doctor. “That’s the confusing part because the 8-year-old might be asymptomatic.”

Even if the old person is fully vaccinated and boosted, “I’m not sure that if my kid was infectious, I’d still want to visit or have them visit. Just like if my kid had the flu. I’m not sure I’d want them to go visit my parents, so I think that’s a pretty reasonable thing to do, to say we should test kids before they go visit high-risk people as a reasonable way to protect high-risk people.”

Folks, this omicron variant is far, far more contagious than previous strains of the illness. We’re all probably going to get it at some point. The good news is, it’s not nearly as severe as delta, which means we should just go back to living our lives and take common sense precautions to protect those who have immune system dysfunctions or who are elderly.