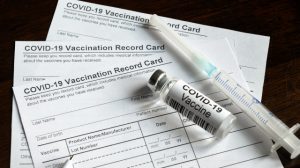 According to Dr. Ashish Jha, who is the dean of the Brown State University School of Public Health, having COVID vaccines in schools across the nation would be a “good thing for everybody,” but noted they should only be implemented at the state and local level, not by the federal government.

“The way I see it is I’m in general favor of this because I have kids who go to school,” Jha commented during a discussion on Newsmax’s “Wake Up America.” “I’d rather have them all be vaccinated when the FDA has fully approved it for kids, which it is not yet.”

The comments made by Dr. Jha come after Dr. Anthony Fauci, the current head of the National Institute of Allergy and Infectious Diseases, stated over the weekend during a conversation with ABC News that requiring vaccines for school attendance is nothing new, noting they have been used for decades to fight against illnesses like smallpox, measles, mumps, and others.

“Lots of places have vaccine mandates,” Jha went on to say.

“My take is we should not have a lot of infectious diseases spreading around in schools if we can avoid it,” Jha proclaimed. “If we have vaccines that are safe and effective, we should use them and that will reduce the amount of burden and kids the number of days kids are out of school. It’s just going to be a good thing for everybody.”

He also disagreed that children are “statistically” at no risk of danger from COVID-19, and added that flu shots should not be mandated, even though CDC records show children are at high risk from seasonal flu infections.

Jha noted that flu vaccines are mandated in many places, including where he works, but at the same time the shot is not as effective as the COVID-19 vaccinations that are available.

The doctor also said that he believes the COVID vaccinations will still be effective against the coronavirus and its variants by the time they’re approved for children, potentially sometime next year.

“We have all these variants out there, but the vaccines still largely work,” said the dean of the Brown University School of Medicine. “We were seeing this even now against the delta variant, which is pretty different than the original variant. The vaccines generate this very broad-based immunity that seems to hold up. I have to say I wasn’t sure that it would hold up as well as it has…my expectation is that it will continue to hold up. But if not, we’re going to have to make some tweaks to the vaccine. But I think that’s unlikely. I think the current vaccines are going to hold up against the variants.”