Dr. Ford’s Lifelong Friend Says She Was Pressured to Change Story That She Knew Nothing of Assault 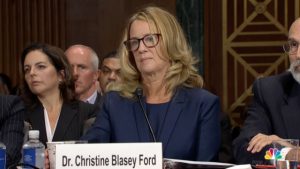 As protesters who are determined to “believe all women” descend on Washington DC like the Wicked Witch of the West’s army of flying monkeys, the story put forth by the woman they claim to believe gets less and less believable.

Of all the many red flags with Dr. Ford’s story that Brett Kavanaugh sexually assaulted her at some point in the early 1980’s, the fact that her lifelong best friend, Leland Keyser, claimed three times to not be acquainted with Kavanaugh and have no knowledge of the alleged encounter seems to have been the cog in the FBI’s dismissal of the allegations.

Now, the Senate Judiciary has received information that Keyser may have been pressured to change her story after initially releasing her statement that she was unable to corroborate Dr. Ford’s story.

The Wall Street Journal reports that Keyser says she received texts from Ford ally and former FBI agent, Monica McLean, who urged her to “clarify” her statements.

A friend of Christine Blasey Ford told FBI investigators that she felt pressured by Dr. Ford’s allies to revisit her initial statement that she knew nothing about an alleged sexual assault by a teenage Brett Kavanaugh, which she later updated to say that she believed but couldn’t corroborate Dr. Ford’s account, according to people familiar with the matter.

Leland Keyser, who Dr. Ford has said was present at the gathering where she was allegedly assaulted in the 1980s, told investigators that Monica McLean, a retired Federal Bureau of Investigation agent and a friend of Dr. Ford’s, had urged her to clarify her statement, the people said.

The statement to the FBI offers a glimpse into how Dr. Ford’s allies were working behind the scenes to lobby old classmates to bolster their versions of the alleged incident, as were Judge Kavanaugh’s.

A mutual acquaintance of the two women denies that there was any “pressure”, but their stated understanding of McClean’s intentions is telling in itself:

A person close to the former classmates said it was her understanding that mutual friends of Dr. Ford and Ms. Keyser, including Ms. McLean, had contacted Ms. Keyser after her initial statement to warn her that her statement was being used by Republicans to rebut the allegation against Judge Kavanaugh. The friends told Ms. Keyser that if she had intended to say she didn’t remember the party—not that it had never happened—that she should clarify her statement, the person said, adding that the friends hadn’t “pressured” Ms. Keyser.

Yes, the fact that Keyser didn’t remember Kavanaugh or the party were used by Republicans to rebut Ford’s claim…because Keyser was unable to corroborate Ford’s story.

Whether or not Keyser believed Ford made no difference, Ford named her as having been at the party but she has no recollection of any of it, meaning Keyser can offer no evidence.

Naturally, Republicans, who are looking to determine whether or not a last-minute revelation from Democrats that they’d been contacted months prior by a woman claiming to have been sexually assaulted by Kavanaugh is a fabricated claim against him, would take note of the fact that her best friend doesn’t remember.