Dr. Fauci Says Not To Focus On Number Of COVID Cases; Here’s What He Thinks We Should Be Focusing On 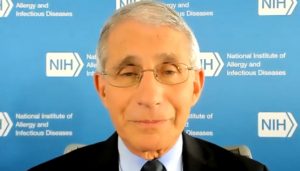 Dr. Anthony Fauci, the director of the National Institutes of Allergy and Infectious Diseases and the chief White House medical adviser, recently stated that folks need to “focus on the hospitalizations” due to the coronavirus and not “the total case numbers.”

Does anyone really believe anything this man has to say at this point? Besides the members of his cult that is?

Fauci recently spoke on ABC’s “This Week” with host George Stephanopoulos over the weekend, saying, “As you get further on, and the infections become less severe, it is much more relevant to focus on the hospitalizations as opposed to the total number of cases.”

Johns Hopkins University reported on Monday that the U.S. daily number of reported infectious has surpassed 1 million as the omicron variant, which is thought to be more contagious but less severe than other variants, spreads in the U.S.

“Given the large number of cases, we have not seen a concomitant increase in the relative percentage of hospitalizations; but again, hospitalizations are often late-lagging indicators,” Fauci stated during the interview with ABC.

The doctor then pointed out that “when you have multi-multi-multi-fold more people getting infected, then that amount means you’re still gonna get a lot of people that are gonna be needing hospitalization, and that’s the reason why we’re concerned about stressing and straining the hospital system.”

“One of the things we hope for is that this thing will peak after a period of a few weeks and turn around,” he stated. “We’ve seen that happen in South Africa.”

Fauci then recommended being a good little boy or girl and getting vaccinated, then getting your booster shots, and of course, wearing a mask to “help to blunt a surge even as pronounced as the omicron surge.”

Doesn’t it seem like Fauci just wants this nonsense to continue going in perpetuity? I mean, this man has been made some kind of false god, a national hero among the radical left, constantly shaping policy and being thrust into the limelight.

Seems logical to assume he doesn’t want to give all that up.