Dr. Fauci Becoming Frustrated About Reports Of Rift Between Him And Trump; Calls Claim ‘Ridiculous’ 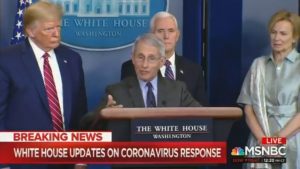 Dr. Anthony Fauci is becoming more and more frustrated with media reports that tensions between himself and President Donald Trump are damaging their relationship, stating that claims of this nature are “ridiculous.”

Could this all be an attempt by the mainstream media to slam and ridicule President Trump and rip apart the task force put together to help us defeat the coronavirus outbreak?

“The president has listened to what I have said, and to what the other people on the task force have said. When I have made recommendations, he has taken them. He’s never countered or overridden me. The idea of just pitting one against the other is just not helpful,” Anthony Fauci said during an interview with WMAL on Tuesday. “I wish that would stop, and we’d look ahead at the challenge we have to pull together to get over this thing.”

“Really, fundamentally at the core, when you look at things, there are not differences,” Fauci said.

During a discussion with Fox News, Fauci made it clear that the president has “never overruled” him in matters pertaining to how to respond to this health crisis, which has now resulted in more than 500 American deaths.

President Trump, who was appreciative of Fauci’s efforts to defend their rapport said, “Thank you, Tony.”

Over the weekend, Fauci stated that his role in this is to provide information from a more scientific point of view, while that of the president is to provide people with hope and reassurance.

Fauci was later asked if the president disregards scientific data regarding the virus presented by members of the task force, to which Fauci replied, “That’s completely untrue.”

“I meet with him virtually every day. He listens. I’ve never had a situation where I strongly suggested something to him that he rejected,” Fauci told the Philadelphia radio station. “I think this idea that there is any conflict between the two of us is not based in any reality.”

In other words, what’s being reported by the media is just more fake news. Big shock, right? We’re all pretty much used to the mainstream news outlets telling lies about the president and his administration.