Dr. Anthony Fauci Raking In The Benjamins With $417.6K A Year Salary; Highest In The Government 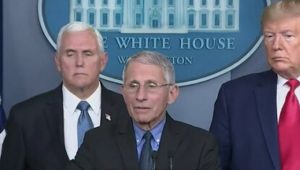 So Dr. Anthony Fauci, the leading expert — supposedly — on infectious diseases in the United States, who has been overseeing a lot of the work going on concerning the coronavirus, is not only the highest paid physician in the government, he’s the highest paid government employee period.

And there are 4 million federal employees. Yeah. This guy is making a whole lot of money off this COVID gig, wouldn’t you say? And since he’s paid by the government, that means you and I are providing this nice cushy lifestyle for him.

Dr. Anthony Fauci, 80, who recently disparaged former President Donald Trump in his first White House briefing under President Joe Biden, made a U.S.-high $417,608 in 2019 as the nation’s leading infectious disease expert, per the report.

Then a global coronavirus decimated the world under his watch as Director of the National Institute for Health’s (NIH) National Institute of Allergy and Infectious Diseases (NIAID) and current chief medical adviser to the president. More than 419,228 Americans have died with COVID-19 in the past year under Fauci’s watch, and more than 2.1 million worldwide.

Fauci’s salary dwarfed even that of the $400,000 made by the president, Forbes reported, citing OpenTheBooks.com’s Freedom of Information Act requests of those whose salaries are paid by taxpayer dollars.

The man is making a whole lot of bread. Former Vice President Mike Pence only received $235,100 a year. And he was helping to run an entire country! Can you believe Fauci makes more than the vice president?

Granted, both of them are overpaid. No public servant should become a millionaire from working in the public sector.

What makes this really ridiculous is that he’s been wrong about the virus on almost every front. How in the world does a guy who continually screws up still get to keep his job and become super wealthy doing it?