We Don’t Worry About North Korea: There’s one POWERFUL reason! 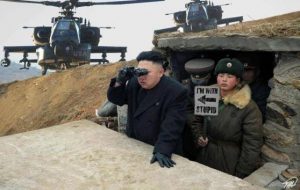 Because we have Chuck Norris! Since 2005 the internet has been steadily filling up with his list of astounding accomplishments. 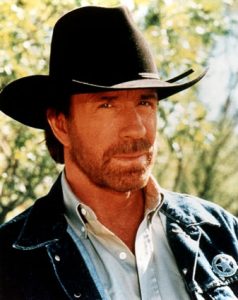 There’s nothing Chuck Norris can’t do. He…can hear sign language, regularly makes onions cry, can build a snowman out of rain, and uses hot sauce as eye drops. Chuck Norris has a diary. It’s called the Guinness Book of World Records. They say whenever Alexander Graham Bell invented the telephone he already had three missed calls from Chuck Norris.

You may be surprised to learn that Chuck has a challenger that just might show him up. According to DailyWire, “the North Korean regime has their very own “fact” book, detailing the absolute greatness of “Dear Leaders” come and gone. Finally, it appears the man who killed two stones with one bird has a verifiable rival in the dictators of North Korea!”

Here are the “facts” they compiled:

According to Ranker, North Koreans believe Kim Jong-un was able to drive at three years old. Children are taught this in school, where Kim’s prodigious childhood is a part of the curriculum.

Here in the U.S. on the other hand, it’s well known that Chuck Norris drove his mother home from the hospital following his own birth. 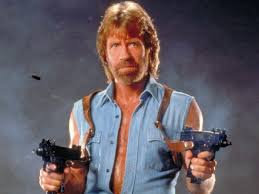 Dear Leader Kim Jong Il made 11 holes-in-one during the first round of golf he ever played. According to The Telegraph, he then immediately retired from the sport. Kim also claims to have once bowled a perfect score of 300, an impressive feat for an amateur bowler.

The games Chuck Norris plays are significantly more intense. For example, he once played Russian Roulette with a fully-loaded revolver … and won.

As for bowling? Chuck also bowled a perfect game, but with a marble.

The Citizen reports that, according to his official biography, Kim Jong Il was born on a mountain top under a brilliant double rainbow.

What the publication leaves out is that Chuck Norris was riding a unicorn over the same double rainbow at the time of Kim’s birth. 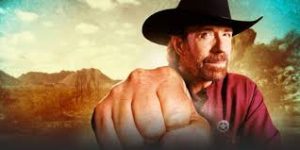 Kim Jong Il created the hamburger, according to North Korean publication Minju Joson. I’d like to give major kudos to the former dictator for introducing such a great food item to the world.

More impressively though, Chuck Norris once picked an orange from an apple tree and and made the best tasting lemonade of all time.

According to MSN, the North Korean people don’t believe that Kim Jong Il ever pooped. His body was so highly efficient and perfect (little pot belly and all) that nothing he consumed was ever wasted.

It’s never been claimed that Chuck Norris doesn’t defecate (as far as I know), but what I can tell you, is that he never flushes the toilet … He just scares the s**t out of it.

Chuck Norris once again comes out on top by unanimous decision! We may be on the brink of nuclear winter (although I think it unlikely), but if worst comes to worst, perhaps we can rely on the national treasure, that is Chuck Norris, to protect us from the worldwide forces of evil. He is, after all, the only man alive who can kick you in the back of the face.